By Lance Eaton - June 06, 2017
Here I am, back again at the start of the fourth semester (or first semester of my second year as a PhD student and well, I'm nonplussed.

It's been about three weeks since I finished last semester. and though I made sure to take that three-week   break as a three-week break and do little to engage with my program and allow myself to reboot, I'm not sure I'm as recharged as I would like.  I guess I would call it a bit of a malaise that I find myself in that is in part generated from me and in part from the program.  The part that is from me comes from a mixture of things. 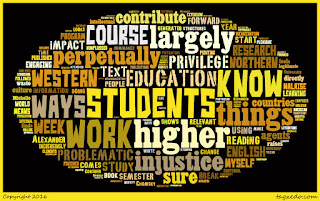 So while I have certainly taken a break during this time, that doesn't necessarily mean I have stopped from engaging in intellectual work or contemplation--I don't know that I'm capable of that since, learning, thinking, and reflecting are things that I am largely attached to as a central piece of my identity.  However, sometimes, what I am learning and reflecting on can have a strong emotional impact on me and throw me into a bit of (get ready for it...we all know this is coming), existential crisis.  In this instance, I had the pleasure of reading Noam Chomsky's Who Rules the World followed by Michelle Alexander's The New Jim Crow: Mass Incarceration in the Age of Colorblindness.  Both of which looks at the large systems of injustice (one of Western hegemony and the other of white American dominance) and ask how did we get here and what are the elements that contribute to it.  Both are complex and nuanced and largely reveal systematic thinking and structures that perpetually reproduce injustice and dehumanization.  So those have been fun to consider as a white middle-class male in a country whose external and internal history has been active participants in such perpetuations of injustices.

But that only gets more problematically compacted when I start to read and thinking about higher education in a global context (the morning course I am taking this summer session) to see how globalization and in particular, globalization of higher education has the potential to contribute to that and make things even more problematic.  Is higher education as an extension of largely Western (or Northern) dominance in which we push ways of knowing, culture, and our own legitimate ways of training people onto other countries (by directly setting up campuses there, holding people from their countries in disregard given their non-Western (or non-Northern) credentials?  For instance, if one has a PhD in literature from the University of New Delhi and have published many articles in Hindi publications (which may have as much readership as those in English), but few in English, that professor's status is devalued because he or she has not published in English or--maybe has not relied enough on English-produced research in his/her works.  Therefore, for me, this idea of spreading Western (or Northern) higher education directly or indirectly seems problematic, which raises the question, how am I contributing to this as an agent of higher education?  Are there steps to counter it or to de-establish in what ways Western/Northern privilege contributes to it?

That's the morning course--thinking about what higher education means in an increasingly globalized (a loaded term on its own) world.  But then there's the afternoon course which is about the impact of college on students.  Here, the problems unfold in two ways.  One is that the text we are using mostly for this first week is fifteen years old and focused on student development n the 1990s.  Basically, it's a mega meta-analyses of thousands of students on a population that has no relevant to my work today.  The mention of online courses or the use of technology is nonexistent and the course in this capacity feels like an utter waste of time and a disappointment.  While the text we are using is a famous text and there is relevant lessons to take about approach and such, it feels like we're assigned a section of the Encyclopedia Britannica from 1995 to study and consider how that information informs our present.  Sure some of it may be relevant, but large gaps are likely to exist and make whatever we do take from it highly fragile and doubtful.

Thus there is a sense of waste but that is only steepened by actually reading the text.  After all, the text is supposed to be a key book in the field of student development and so much of the information is vague, insignificant (even when it is "significant"), and generalized to be of any use.  "Study X shows that students who's name ends in W may be significantly impacted by sunny days so long as they occur in the spring  and students sit in buildings that have an eastwardly-facing window.  However, this study was limited to one institution based on the West coast."  Yeah--that's what I'm talking about.

So the knowledge itself is highly contextual, limited, inconclusive, and outdated, which I totally get, but here is where it all starts to come together problematically.  We're studying things that are increasingly irrelevant, coupled by recognizing that the work we are doing has the potential to be problematic in the ways it includes and excludes different peoples and groups, while also privileged because of where we are doing our work. Most, if not all of us, see ourselves as agents of change (after all, one usually finds himself/herself in higher education because they want to participate in the life-changing process we assume it all to be), not necessarily agents of systematic perpetually reinforcing inequalities and injustice.  Yet even if we are able to do some modicum of research are we likely to become another research study compiled into a book that shows how limited and eventually irrelevant our research is?

In doing so and knowing that this is our ultimate fate, compromise our character?  If I know that I'm not likely to be able to change the system because of how massively structured it is around ideologies the perpetuate inequity, privilege, and injustice and I know the work that I do as a scholar or as a practitioner largely perpetuates this or is minimalized or marginalized, what does my desire or willingness to continue to move forward say?  In some ways, it could be construed as my privilege to know its likely meaninglessness and still go forward because it will still advance my personal life (already a position of privilege).  In other ways, moving forward could be seen as a site of resistance to and that no matter that I may not have an impact, fighting the fight is still important.  (Of course, interrogating that response would also raise the question of privilege to do that; after all, tilting at windmills is something one can choose to do as a pursuit).

And if you're wondering about the emphasis on the futility of it all, that derives much from Chomsky and Alexander; particularly Alexander who shows how systematically and subtle we have culturally shifted our focus away from racial inequality and created a blindspot to how we responded to the equality in the post-Civil Rights era.  Of the two books, that one is the must-must read.

So yes, there is a where my current existential malaise finds me.  Trying to sort out the big things to understand how they work on the small things.  I certainly don't have answers and am not sure what going forward looks like, but that's where I find myself on the first day of year two.


Want to keep up with my PhD adventures?  Check out any of the links below:
Sub-series specifically about the dissertation: