Showing posts from October, 2020
Show all

Review: Geeky Pedagogy: A Guide for Intellectuals, Introverts, and Nerds Who Want to Be Effective Teachers

Geeky Pedagogy: A Guide for Intellectuals, Introverts, and Nerds Who Want to Be Effective Teachers by Jessamyn Neuhaus
My rating: 4 of 5 stars

Neuhaus's collection of thoughtful and insightful tips for instructors is a wide-range how-to and why-to that instructors of every kind will find useful with practical tips, research-related groundings, and places to find more knowledge on the subject of effective teaching. As a person who is clearly passionate about their field, Nauhaus knows that passion is useful and important but not enough to effectively teach because many instructors make a variety of mistakes when they step into the class. These include forgetting what it's like to be a non-expert in the field, determining that everyone must have the same passion for the subject as they do, and rethinking how one was taught with how one should teach. Neuhaus structures the book in a way that helps readers through the process of teaching. Initially, she explores what it means to tea…
Post a Comment
Read more 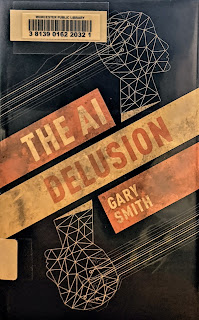 The AI Delusion by Gary Smith
My rating: 4 of 5 stars

A.I. is the modern snake oil solution to all your work needs and it's likely to screw things up. Or at least, that's Smith's general argument as he breaks down the fundamental problems with artificial intelligence. One such problem is the fact that even labeling it "intelligence" tricks people into a false sense of security about what AI does. A.I. does not have intelligence or intention and therefore, its ability to do the things that so many people claim it can do is disconcerting and misleading. Essentially, Smith argues that most of AI works akin the Texas Sharp-Shooter sham wherein either a gunslinger shoots a bunch of holes into a wall and then puts the target over one of the shots and say "look, I got a bullseye" or points and shoots at a bullseye and misses, but then moves the target over. Because computers just crunch numbers without any sense of relation or meaning, the end result is that it …
Post a Comment
Read more 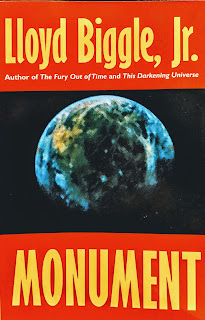 Monument by Lloyd Biggle Jr.
My rating: 4 of 5 stars

The people of Langri have the Plan. And the Plan will hopefully be their salvation, even if no one else actually understands what the plan is all about. Langri was a largely unexplored planet with a human population that lived a mostly primitive (at least by the Federation's standards) life. But somewhere along the way, a visitor gave them the knowledge to be prepared for when the Federation discovered their planet and wish to take advance of the near-paradise conditions. One such person does appear, Wembley, and he works ceaselessly and illegally to swindle the natives out of their land and resources.

Biggle's novel is a fun story where the underdog, not only wins but knows they are going to win from the near beginning (ok, maybe about a third of the way). It has echoes to the present (some 40 years later) in the ways in which indigenous folk work hard to protect what is there and inevitably, businesses are always scheming to…
Post a Comment
Read more
More posts