Showing posts from July, 2019
Show all

Review: From #BlackLivesMatter To Black Liberation

From #BlackLivesMatter To Black Liberation by Keeanga-Yamahtta Taylor
My rating: 4 of 5 stars

Taylor lays down a nuanced, powerful, and important critique to understanding African-American political and civil movements of the last hundred years. One of her first goals is to contextualize and explain the rise of the Black establishment, Black leaders from post-Civil-War to the present who have bought into the white power structure and while at times, advocate for equity and equality, are just as likely to throw people of color under the bus. Included in this critique is Barack Obama for his often tepid and delay responses to the tragic killings of too many Black lives to list and his disdain for rioters while proclaiming to follow the process (that has repeatedly failed people of color). She uses the construct of the Black establishment to then discuss the rise of a new black radicalism that is consciously intersectional and critique of being absorbed into the Black establishment. Namely…
Post a Comment
Read more 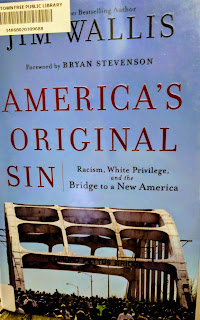 America's Original Sin: Racism, White Privilege, and the Bridge to a New America by Jim Wallis
My rating: 4 of 5 stars

Wallis explores the legacy of racism in American culture through the lens of religion and spirituality, raising biblical arguments and concerns for the ways in which white America has never truly reflected and confronted that legacy. He engages in this discussion on many fronts from the historical intersection of religion and activism to the ways in which certain denominations have perpetuated systematic racism to the degree of segregation that occurs in churches (exploring the truth in Martin Luther King's words that 11am on Sunday is the most segregated hour in America). His tone is welcoming as he engages with scripture, history, law, and culture as means of invoking God's fairness, equality, and equity as missing elements in religious circles that refused to engage in racial dialogue. Wallis's discussion also includes the discussion of immigration an…
Post a Comment
Read more

Review: Dear Luke, We Need to Talk, Darth: And Other Pop Culture Correspondences

Dear Luke, We Need to Talk, Darth: And Other Pop Culture Correspondences by John Moe
My rating: 3 of 5 stars

Moe's collection of fictional pieces by fictional characters or ridiculous takes on real-world events is delightful and amusing for those looking to get their pop culture geek on. He tries to hit all corners of the nerd-universe with pieces on alternatives and rejected proposals for SuperBowl half-time shows to the diary of the shark from Jaws to a series of frustrating phone calls between War Horse and his agent to online reviews of different fictional bars (from Cheers to Moe's!). Not all pieces are effective, especially for those who might not be fans of that particular pop culture but when he hits, readers can expect to appreciable laugh. I enjoy the playfulness of a book like this where the author takes the reader on a tour of the pop culture that in some way (just by the fact that he chose these particular icons of pop culture) is relevant or meaningful to him. Addi…
Post a Comment
Read more

Review: Stay: A History of Suicide and the Philosophies Against It

Stay: A History of Suicide and the Philosophies Against It by Jennifer Michael Hecht
My rating: 4 of 5 stars

Hecht's book is a fascinating one and one that certainly resonates with me. Her goal is to provide a historical exploration of suicide and, in part, use that history of numerous writers, institutions, and arguments against suicide to then develop a secular argument against suicide--that is, to stay. There's much to her argument that I appreciate. Firstly, she carves out a particular kind of suicide: one born of depression. This, in itself, I see as important and a distinction from other types of suicides that we can--at times--find more morally acceptable (e.g self-sacrifice). She teases out how great thinkers from Socrates to Locke to Durkheim to Camus to Foucault and does well in bringing much more nuance to the discourse than has been done previously. Building a secular moral argument against suicide, despite a tendency for Western individualism to appear to argue for …
Post a Comment
Read more
More posts