Showing posts from August, 2018
Show all

The Infinity Gate by Sara Douglass
My rating: 4 of 5 stars

For me, this book is so bittersweet. While The Wayfarer Redemption trilogy (the second trilogy) in the series had a full sense of closure (in fact, I was at first surprised when Douglass returned to this fictional world), this book does not. It outright tells you that there is so much more that's going to happen. And that's all well and good, but unfortunately, Douglass passed away in 2011, which means those adventures are never to be written (at least, by her; there's a part of me praying she left outlines of books to come and her estate is just looking for the right person--maybe one chosen by prophecy--hahaha--to pick up the pen on her behalf). So in that regard, the book's entire movement feels like an act of reluctant engagement for the fan-reader because it ends (the book) but it doesn't (the adventures) but it really does (because we never get to know what those are).

Death's End by Liu Cixin
My rating: 5 of 5 stars

Where do I even start with this one? I'm not even sure I could describe the plot and if you haven't read the previous two books, then don't bother. But I do encourage you to read the previous two because it makes this final book all the more epic. Liu's intricate plot about how humankind survives past the early and hostile confrontations with alien life is mesmerizing. Both in weaving believable science and believable human psychology together, Liu explores a future that feels real and fantastical only because it hasn't happened. This tale begins after the peace has been established between humankind and the Trisolarans but this is a tenuous peace that self-destructs shortly after the selection of a watcher is unwilling to sacrifice the Trisolarans and humans. Thus, the tension of the second book is quickly reprieved but soon, the Trisolarans are surprised by other loose ends that lead humankind to actively try to …
Post a Comment
Read more

Review: Learning as a Way of Leading: Lessons from the Struggle for Social Justice

Learning as a Way of Leading: Lessons from the Struggle for Social Justice by Stephen Preskill
My rating: 4 of 5 stars

Preskill and Brookfield examine the concept of leadership and reframe successful and meaningful leadership as a means and willingness to learn. They then explore how that frame of leader as learner plays out in different ways of learning (learning by asking others, learning by critical self-reflection, learning by sharing responsibilities and power, etc), the challenges with each way, and an iconic leader that has embraced that way. While the book's main chapters can feel formulaic, the ideas are still powerful and I appreciated their different approach to leading. For those in higher education, the merits of this book are perfect but even beyond that, I think that if a leader were to reframe his or her work as an active learner, it might mean more positive changes within organizations and communities as it creates more possibility for leaders to change or adjust th…
Post a Comment
Read more

The Twisted Citadel by Sara Douglass
My rating: 4 of 5 stars

The second book in the DarkGlass Trilogy, Douglass's final trilogy following the adventures of Axis and the characters in the world he inhabits. I liked the book because like she always does, Douglass turns the prophecies she creates on their head and because we see a side of Ishbel that becomes increasingly into her own and creates a life on her own terms. The plot is standard Douglass: a powerful and scheming god-like powerful evil is trying to conquer the world but is held back by people (Maximilian and Ishbel) that it (referred to as The One) knows can do it harm and therefore must find a way to eliminating them. Add to this, a dying race (the Icarii), a newly discovered race, (the Lealfast), a race on the brink of destruction (humans) by a race of evil creatures (the Skraelings) and questionable alliances among some of them. This volume in many ways is a mad--chase to Serpent's Nest which will become Echo Falling …
Post a Comment
Read more

Books for White Folks Part 12: Since I Started... 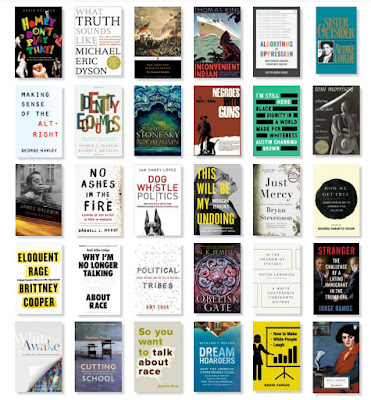 I published the first post in this series back in March--about five months ago.  I thought I had already read a good deal of books on the subject and thought to some degree that I had a good list.  But in the five months since, I've read another thirty or so books that would fit on this list, so I thought I would have a final-final post on the series--not on reading topics that address whiteness, racism, white supremacy, and people of color's struggles and resistance against systematic white supremacy, but just a thought about the process and reasoning behind it all.

My approach as I've said elsewhere is that I read a lot of books on this subject matter as an inoculation of sorts against the dominant narrative within our culture that absolves itself of responsibility for the historic and contemporary systematic marginalization of people of color in the US and the world as a whole.  In a world in which a blatant and open race-baiting, sexist, xenophobic president of the US…
Post a Comment
Read more Another book of amazing books!  I got in a lot of listening but not necessarily a lot of reading--only one book (but it was a great one!).  We were moving this month so I was a bit busy with that (but always an opportunity to listen to audiobooks while packing away, right?).  I also read more graphic novels because I had been light in my reading of them of late (besides the ones that I'm reviewing).

In other interesting news, I was featured in Inside Higher Ed for my proclivity for audiobooks and using Goodreads.  In other words, I was recognized for the audiobook nerd that I am!

So what are the books that wowed me this month?  Check them out:

Brotopia: Breaking Up the Boys' Club of Silicon Valley by Emily Chang Chang critical look at the misogyny and chauvinism of the tech industry that sits well with books like Weapons of Math Destruction: How Big Data Increases Inequality and Threatens Democracy, Algorithms of Oppression: How Search Engines Reinforce Racism, and Technically…
Post a Comment
Read more

Review: Making Gumbo in the University

Making Gumbo in the University by Rupert W. Nacoste
My rating: 4 of 5 stars

Nacoste's book is an enjoyable read in many regards and a look at the problems that those involved in diversity work often come up against. Nacoste relates his experience as a chief diversity leader on southern US university and the walls he came up against while trying to create a more effective and meaningful approach to diversity at the institution. For me, I liked how this book captured the fact that diversity is not milk-warm acceptance of one another but is embedded in the tension of recognition of differences while trying to move forward in different directions. That is, diversity is not blind acceptance but respectful dialogue of differences that at times will be hard or unlikely to be reconciled. He also provides a good frame for institutions to rethink diversity as housed in a particular place or position and more embedded throughout the different areas of an institution; what does diversity mean f…
Post a Comment
Read more
More posts