You can watch here, on YouTube or just read all about it in the post below.  Enjoy and let me know what you think!  Also, don't forget to check out
You can watch this episode on YouTube and all the other episodes as well.  (Also, feel free to subscribe to my channel on YouTube as well).

As always, you can find the full script below, but also, you can get the slide deck itself and the original script, which is covered by a Creative Commons license...of course. 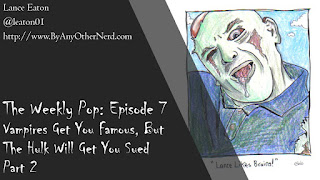 
Welcome back!  In the last episode of this 3-part series adapted from my public lecture, we’ll talked about the copyright, the commons, and how that has played out with regards to classic texts like The Iliad and The Odyssey.

Ok--just to recap, we discussed copyright where it came from and what it does.
We’ve discussed the commons and traced the way in which works in the commons offer opportunities for new stories.

Copyright protects the creative works of authors but at the same time, restrains the creativity of other authors.

So again, we have this tension.  Copyright and the commons both push and pull on creativity, right?


How do we feel about censorship?  In the United States, we generally do not like censorship.  We find it problematic in the modern context; this is one of the challenges we’re grappling with today as we reconcile people with a hateful and violent agenda and whether they deserve censorship or not.

So, with the First Amendment, we are disinclined to oppose censorship in any official capacity with certain limited exceptions.

But historically, creative works have been subject to a great deal of censorship within our country and beyond.  What could be said and shown was restricted.

Even in the 20th century, we saw several censorship laws enforced and even industries practicing censorship (upon threat of government censorship).  They included


Censorship is a tricky thing and I’m not going to argue for it, but the idea of restriction can in fact make us incredibly creative.

Don’t think so?  When we have rules--rules that we don’t want to follow--we find amazing ways to get around them.

Ok, so despite being restricted, how many of you still found ways to bother your sibling?

Right?  We all played the game, “I’m not touching you” as we hold our hand millimeters from their face or the one my brother LOVED to play with me, “stop hitting yourself.”

I know--when we were kids, we are amazingly creative in bypassing the rules we were given.  Heck, when I was 7 years old, I was told I wasn’t allowed to walk out of my bedroom door because I got in trouble.  So what did I do?

I jumped out my second story window.

So restrictions can make us think outside the box...or the window as the case may be.

We see this within poetry--everything from sonnets to limericks to haikus--they all have restrictions on what you can do--and from that, we get amazingly creative and powerful works.  In music, we limit songs on the radio to 3-4 minutes and we continually come up with music that many of us enjoy.

So restrictions-which is in essence what censorship is--do have an interesting effect on us.


And this is true of the 19th century.

In the West, we have a serious obsession about sex.  We’re so obsessed about it, we don’t want anyone to talk about it.  We’re so weird about it, we decide that it’s easier to tell children that somehow a bird with a giant mouth somehow flew us and then dropped us down a chimney like a coconut carried by a swallow RATHER than saying we came out of a woman’s vagina.  Think about that, “yes junior, you came from a flying bird delivery service--it was like a premordial Uber Eats program...but with birds dropping babies like bombs.”

But particularly in the 19th century at the birth of mass-printing, writing about sex was frowned upon and yes, censored at times or had to be attacked in indirect ways.  Censored by the publishers and censored within the courts. So what did that mean for the stories that we tell?


Seriously!  Because they couldn’t talk about sex, they tried to find ways to instill in into literature everywhere.  It’s not directly in plain sight, right? But peel back the subtext of many a story and yeah, literature was often obsessed with sex. If you don’t believe, then be sure to take some literature courses--if your professor doesn’t bring up all the sex going on in these stories, then definitely ask for your money back.


One of the best places to find stories that are all about sex without ever having to be about sex are vampire stories.  As sex symbols, they gained popularity in the 1800s. Most of us know about Dracula by Bram Stoker, but its popular predecessor was Carmilla by Sheridan Le Fanu--in both cases, we see the seduction and hypnotic trance of young women who inevitably become tainted by their encounter with the vampire in the story.

And yes, vampires are great vehicles for sex, when you are not comfortable or able to talk about sex.  Why not? They are eternally youthful, they prefer the dark, and their means of infecting you or making you impure is by penetrating you with their phallic fangs.  It’s a very intimate interaction.

And the result:  You become pale, ill and may die--which means you got yourself a sexually transmitted infection or you live to feed on others and therefore, breed more vampires.

And so here’s where you discover why Vampires will make you rich.  They are monsters from the commons that largely represent sex; and funny thing is, we humans are interested in sex as much as we are in stories.  Put them together and you have yourself triple word score on Scrabble (or Words With Friends).

So, take sex disguised as horror and make it freely available, and sure enough, people will want to use that as a vehicle for storytelling--for well over a century.

Censorship can produce fascinatingly ideas that stick with us long after the censorship has gone away.

That’s not an endorsement of censorship, but an observation of it.  When censored, humans still try to find ways to circumvent it.

Would vampires be as popular today if writing about sex was not censored in the 1800s?  Think about thousands of books, comic books, movies, short stories, podcasts, and video games that feature vampires.  Everything from Count Chocula and Sesame Streets "The Count" to Buffy the Vampire Slayer to Twilight to Van Helsing and much much more.   But of course, censorship in storytelling today is much less prevalent than in the past. But, vampires are still popular.

So now that we’ve found out how vampires will make you famous, next time, we’ll take a look at how the Hulk will get you sued!

All right, that’s all for today.  What do you think about this argument?  How has this discussion or this discussion coupled with part one made you think differently?   I’d love to hear them so post them in the comments below or hit me up on Twitter-- @leaton01