By Lance Eaton - March 09, 2018
February went by quick and alas I did not get to read any physical books (but am almost done with The Obelisk Gate by N. J. Jemisin).  However, it is a month filled with fantastic reads and inspired a new series of blog posts (that would be the Books for White Folks series).  In the meantime, here is a slice of the books that stood out and warrant your attention!


Cutting School: Privatization, Segregation, and the End of Public Education by Noliwe Rooks 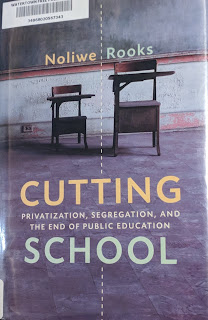 This book, in many ways, does the critical work for K-12 education that Michelle Alexander does for the criminal justice system.  Rooks traces the history of "school choice" to its origins in the rise of segregation and shows how the United States has a consistent history of taking public dollars away from educational spaces where marginalized folks could benefit to spend on public schools of white students or in the case of school-choice, into the pockets of private entities.  Some of her best work is illustrating the depths to which African Americans were denied public education throughout the late 1800s and early 1900s, to the point that despite often having little wealth, African American communities would be the economic base to fund the creation of schools.  In that way, Rooks' work reminds the reader of the long history of investment and determination in spite of outright legal and economic exploitation that African Americans faced well after slavery.  From there, Rook illustrations how school choice has in recent decades still resonated with structural racism, draining cities of resources with often little to show for it besides more distressed communities and wealthier private interests.  If you have any stake in education, this is a necessary read to understand that we are continually moving towards a privatized education system that will increasingly perpetuate racial inequality.


Dream Hoarders: How the American Upper Middle Class Is Leaving Everyone Else in the Dust, Why That Is a Problem, and What to Do About It by Richard V. Reeves

Reeves addresses something that I've seen for a while but had trouble naming.  He shows in many ways how the upper-middle class is essentially pulling up the ladder of opportunity in our culture just as much as the elites are in the ways they make personal choices--often canceling out or undermining the opportunities that they were afforded to get to their current economic status.  Reeve explores how the tearing down of policies within education, finance, and public policy had been stalwarts to help grow the upper middle class, but that such policies are often being replaced with policies that benefits the upper-middle class in lieu of lower classes.  Some of those policies include tax benefits around home-ownership, capital gains, college education, and the like.  Reeves contends that every time there is an attempt to reassess these, the upper-middle class vociferously demands it stay in place--often to the detriment of other classes that could benefit from that redistribution.  He contrasts this with the spoken desire by many within the upper-middle class that claim they want to see more programs that help poor, working and low-middle class families.  A good example is college education wherein upper-middle-class families rely on legacies, merit-based scholarship (which is largely geared towards upper-middle class students), and increased chances of admission because of the family's wealth (e.g. familiarity with a campus increases chances of admission; for schools that are far away, upper-middle-class families can spare the resources to have their child visit the school several times).  Ultimately, Reeves shows that the scales are already tipped in favor of upper-middle-class but they continue to want more at the sacrifice of opportunity for poor, working, and lower-middle class.

How to Make White People Laugh  by Negin Farsad

Farsad's is a charming and delightful memoir and commentary on race/ethnicity, American culture, humor, and what it means to be an Iranian-American in a (Islamaphobic-poorly-disguised-as-obsessed-with-radical-Islam-terrorism) US culture.  Her anecdotes and experiences offer insight into how she and others experience being marginalized as terrorists or somehow, having to explain all 2 billion Muslims in the world.  She also shares some of the origins of her activism around better informing and explaining how she uses comedy to loosen barriers between herself, white folks, among others, and the intersection of her identities.  She has two TED Talks that are definitely good introductions to the book and if you find them enjoyable or bemusing, then this book is likely to hit the mark.  In particular, Farsad's ability to verbally disarm without necessarily attacking helps to present her message and a keen understanding of how life is different for nonwhite Americans in the US.  If you are looking for a book to dip your toe in your help others get more comfortable with understanding the role of nonwhite and marginalized people in the US, this would be a great start to that conversation.


So You Want to Talk About Race by Ijeoma Oluo

Oluo provides a phenomenal breakdown of racism and African American identity in the US today.  She uses a mixture of her own biography and experience and intersplices them with the work that she's been doing for years as a writer on the topic of racism in America.  What I like particularly about her work is that she frames each chapter around a particular question, many of which are questions that' she's been asked and others are questions that are out there in the common milieu (I don't recall if she said in fact she's been asked all of these).  These questions range from "Why can't I touch your hair?"  (The same reason you shouldn't be touching anyone without permission & well, why the hell do you think you even have the right--read: privilege--to ask such a thing of people; it wreaks of fetishizing) to "Why am I always being told to "check my privilege"?" (because inevitably, you're making statements from an uninformed commentary about people you have little knowledge of and experience with) to "Why are students so angry?"  (Well, subject any student to nearly 2 centuries of education taht is poorly-funded, utterly absence of relevant history and cultural respect, along with woeful disregard for the particular struggles and inequalities that are experienced by the majority of black students and go figure, there will be some resentment--BUT that's also doesn't ignore the fact that a willingness to stand up to injustice or to call out the inequalities is framed in such language as "angry" as opposed to "passionate"--thus, perpetuating further stereotypes about African Americans).  With each chapter, Oluo grounds her answers with her own professional and personal experiences along with the appropriate discourse response from a variety of useful resources.  Inevitably, her book will lead to the many others that prove helpful in making such a powerful commentary on being black in the United States.

So here is the full listing of reads for February:

Wanna catch up on my latest blog posts about books?

Curious about what I've read?  Check out annual good reads list:
I also have more specialized lists such as ones on

What have been some of your most recent reads of late?  What book do you find yourself recommending to everyone?  What author(s) can't you get enough of?