The Weekly Pop: Episode #5: The Privilege of Chosen No Ones

You can watch here, on YouTube or just read all about it in the post below.  Enjoy and let me know what you think!  Also, don't forget to check out
You can watch this episode on YouTube and all the other episodes as well.  (Also, feel free to subscribe to my channel on YouTube as well).


Episode 5: The Privilege of Chosen No Ones

And here we are at Episode 5….that’s right--episode 5.  That means we’re on the 5th one for those that are counting...like me.

You know the deal by now right?  I’m going to hit you with a short clip and then we’re going to unpack it.  Sound like a plan?  Good, cause I had nothing else plan, so let’s get on with it.

Ok, so that scene was from Episode 1 of Season 1 of the show Van Helsing.  For those that are unfamiliar with it, it is a post apocalyptic story about a world overrun by vampires--you know, thus USESH.  The series begins with the two characters you see in that scene; Axel and Vanessa Seward.  Vanessa has been asleep for 3 years in some kind of coma and Axel, a marine has been watching over her.  She awakens when a vampire bites her but the vampire turns back to a human while Vanessa is left unharmed.  The scene you see is them talking for the first time, trying to figure out what’s going on.

Vanessa claims that she is no one special.  She says that then and a few other times in the opening few episodes.  But all points indicate otherwise.  Vanessa’s statement of being no one is a  fairly common trope in storytelling, right; where the main character believes they are essentially no one special.  They’re normal.  They are just people living their lives.  Yet, everything around them conspires to tell them otherwise and in many occasions, they are chosen or have the abilities to do great things. 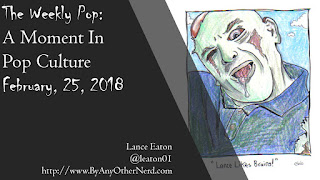 We have certainly seen Vanessa before.  We saw her in Luke Skywalker--he was just a “farm boy.”  We saw it in Anakin Skywalker, he was just a slave.  We saw it in Rey from the new Star Wars trilogy, she was just a junk trader.  We see it in Harry Potter, an orphaned and neglected kid.  We saw it in Frodo Baggins of the Lord of the Rings, also, another orphan.  There’s Emma Swan from Once Upon a Time--also an orphan. And yes, Vanessa is an orphan too. There are plenty of other examples but those just came to mind of ones that I’m familiar with right now.

Now, whenever we hear someone say, “I’m no one.”  Our spidey-sense should immediately go off because, well, in storytelling, no one is no one.  Know what I mean?

By the way, Spiderman and his spidey-sense--was also an orphan.

One of the earliest uses of this line for those that don’t know is in the epic poem, The Odyssey.  You see, Odysseus and his crew get trapped by the Cyclops and Odysseus tells him that his name is “No one.”  So when they ultimately attack and injure the Cyclops in order to escape, the Cyclops keeps yelling “No one has hurt me”--so the Cyclops’ siblings leave him alone.  Smart thinking, right?

Anyways, in more modern times, we see the use of a character claiming to be no one in a very different light.  When someone says they’re no one, especially if they’re an orphan; that usually means they are likely to be someone--a really big someone.

I know this is a trope the world over but I think in the US, it takes on a bigger significance and there’s an interesting discussion to have.  In fact, it might attribute to why Harry Potter became as popular in the US as it did in the UK, despite many other British stories falling flat or only gaining a cult following.

In the US, we have several myths that are bound into many of our stories, values, and ways in which we think of ourselves.

We have the American dream that leads us to believe we can move up the socioeconomic ladder within our lives.  We can outshine our parents and where we came from.

We have the rugged individuality theme that essentially tells us if we think we are a special individual and can show it, then we are and that we will make it (whatever “make it” means).  This theme tell us all that we all should be self-sufficient individuals--that is the true ideal and sign of making it.

We also have the rags to riches motif which blends these two ideas together saying that with gumptions, determination, and a bit of luck, we can go from rags to riches.  That was made famous by Horatio Alger’s dime novels but still permeates our our stories today.

These ideas swirl together and find their ways into our stories so that inevitably, the “no ones” will become, not only someones, but really important peoples.

And see, the thing is, even if the character, the self-proclaimed “no one” doesn’t see it.  We as observers know it.  When Luke says he’s a farm boy or Vanessa says she’s no one.  We see it.  We are standing outside his/her story and knowing that many factors have contributed to them being anything about no ones.  We also know, because of the way that stories work, they are likely to succeed.

But, as we sit and watch as outsiders, we also know that the game was already in their favor.  They were already chosen, they already had the power, they already had the ability.  The story’s purpose is just to unlock that.  Again, they have to work at it but they also have powers and resources that we know will get them there; the story is set up for them to succeed. In fact, the story is set up just for them to succeed.  Other characters, won’t fit the bill.

So why am I interested in talking about this.  Well, I want to connect this idea of the “no one” hero to our cultural concept of privilege.  Now, many white folks or other people of privilege have trouble understanding what it means.  It means, you are that “no one” in the story.  You have challenges and obstacles to overcome, but you also are imbued with things that you don’t realize that are there to help you over come it.

When we talk about privilege, we’re talking about the way the systems work and often set up certain groups to succeed and others not to.  We see privilege operating in many different ways--it operates along racial, ethnic, economic, linguistic, social, gender, sexual, sexuality, ability, age and many other ways.  Privilege can be a result of intersectional identity elements.

So, growing up--even though I was a troublemaker--I was often given the benefit of the doubt whereas people that might not have been white or middle-class may not have been as lucky and when they got caught shoplifting, they were reported to the police instead of reported to parental figures.

In that way, I think the “no one” storyline works really well as a effective tool to help understand what privilege looks like.  In all of these stories, the characters perceive themselves as “no one”--but in the right context--that is, the story--they actually have way more ability than they realize.

So that’s my thought for today in pop culture.    All right, that’s all for today.  What do you think about this idea of “no one” characters as an illustration of understanding privilege in our culture?  I’d love to hear your thoughts or if you have other good examples!

In general,  I’d just love to hear from you about the show!  So, please post them in the comments below or hit me up on Twitter-- @leaton01