The Weekly Pop: A Moment in Pop Culture Episode #1

By Lance Eaton - January 30, 2018
As part of my teaching Pop Culture in the US this semester, a course that I've been teaching for 8 or so years (and online for about 6), I decided to spice up the course in many ways.  One way I'm trying new things is by creating a web-series on moments in pop culture where I think about and discuss something that I am enjoying in popular culture that week.

This week, I tackle a moment within Season 2 of The Chronicles of Shannara.  You can watch the video or you can read the text below.  (Since I had to make a transcript, I figured I might as well share that too!).  Let me know what you think!  Here is the link to the video on YouTube.

So this is a new series I want to try to do in the ensuing year called, The Weekly Pop: A Reflective Moment In Pop Culture.  The series is primarily for my students but I am making it available for others who might also find it interesting and enjoyable. 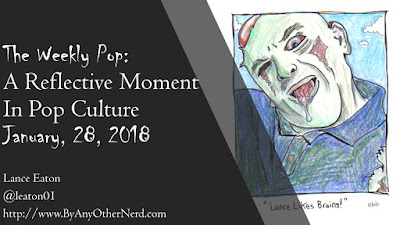 So let’s start with this clip.

Before we go anywhere--maybe pause right now and ask yourself what you are seeing--not literally, but what might be the connotations permeating this scene?  What elements may cause you to raise your eyebrow? So think about that for a minute--maybe rewind the scene.

Ok--let’s talk about this!  That clip was from Season 2, Episode 3 from the tv show: The Chronicles of Shannara.  a tv show that airs on stations like MTV and Spike. Now, for those that don't know, the show originated from a book series by Terry Brooks that originally was published starting in the 1970s. The first of those books was The Sword of Shannara, which was largely a rip-off of JRR Tolkien's The Lord of the Rings. It was a largely derivative work and while exciting it didn't necessarily offer a lot of new ideas.

But then, Brooks comes out with The Elfstones of Shannara and he begins to take the series in a whole new direction.  In fact, over the next four decades, he crafts this world in the series into something very different from Tolkien. Of course their similarities: they both deal with magic; they both have numerous races such as elves, gnomes, dwarves, humans; they both exist in worlds that seem very different than our own.  Yet both series are in many ways tied to this Earth.  While Tolkien and his stories are largely about the past, Brooks’ stories are about the future. Brooks's stories tell us about a future where the modern world has been destroyed and eventually evolved into this fantastic world of elves and gnomes trolls and humans. Of course, there's magic too. By doing so, Brooks does something interesting with his series. He's dealing both with fantasy and. to a certain degree, post-apocalyptic fiction.
So that's all background to just understanding what I'm talking about in this particular tv series. It's a series that was born of a book series that was born in the 1970s that was informed by The Lord of the Rings but attempted to take some of the central ideas and themes and reposition them into humanity's future rather than our past. And all that's just say wow so much of our fiction, be it science fiction, fantasy, horror, whatever, is just as much about us as it is about the worlds that we explore in those stories.

All right, so this week I was watching the second season of the Chronicles of Shannara on Netflix of course. Since I don't have cable I generally watch most of my content on either Netflix, Amazon, or Youtube and then I also borrow a lot of stuff for my local library. which you really should too! Your local libraries are amazingly filled with all sorts of great materials and you can usually tap into a larger library network for even more great stuff. Okay my public service announcement part of this video has been fulfilled--obligatory shout-out to my librarian peeps--CHECK!
Back to season 2 and I’m making my way through it--which is another thing to consider.  We live in an age of binge watching which means we can watch episode after episode after episode.

Now, Steven Johnson has said that pop culture is making us smarter in his famous and one of my favorite books, Everything Bad For You Is Good.  And I agree with him, but what’s also made TV smarter is the ability to binge watch or re-watch.  In the 1960s where a show aired just once and wasn’t on-demand or whose entire episodes could be easily located on a streaming service, it meant that it was hard to build long-complex and nuanced stories through television because if people missed episodes, it could be hard to catch up.  This is why things were more episodic and less season-long story arcs.  Dr. Who is a good example where often it started with episodes or short runs of 2-4 continuations but now aims just as often to tell stories that arc across the season or across seasons.   That is, because we can slip back into previous episodes or easily “catch up”, we can indeed enjoy more complex stories.

Ooops, I got distracted with that tangent.  Ok, serious, I’m going to talk about Season 2 of Chronicles of Shannara.  So I’m a few episodes in and we’re introduced to a  character, named Gareth Jax, a smart and distinguished bounty hunter with, of course, a past.  Now, Jax is played by Gentry White, an African American.  Within the TV series, that’s not particularly surprising.  It is filled with an increasingly racially diverse cast with many nonwhite actors and actresses and many characters who are ambiguous in their race. This, of course, is quite different from the original book series because fantasy as a whole has been dominated by white men telling stories about white saviors.  There’s no other way to put it.

That’s not to say that mold isn’t being broken, but from the Lord of the Rings to Brook’s series to The Wheel of Time, The Sword of Truth, DragonLance, and The Belgariad, it’s hard to argue otherwise.  Thus the fact that the producers made a conscious effort to change the racial makeup of the story acknowledges a very white past (and that whiteness is not just bound up in storytelling around fantasy but much of popular culture within the US).

In that way, fantasy is fascinating to study in that it has been predominantly white men fantasizing about magical worlds where humans clash with other races of humanoids (elves, dwarves, gnomes, etc) and their white protagonists are able to win the day while any sense of non-white folks in these worlds is almost non-existent.  In some ways, it awash in white supremacist ideology; the white humans will vanquish the evil races and rule the world in a good and proper way.

So we are introduced to Jax in a future world of Earth where other types of races dominate what we would call racial tension.  Humans and elves and gnomes barely get along and its clear there’s animosity among them.  You largely get the sense that the racism of yesteryear (or what is today) is gone and Jax’s blackness should not matter.  Hold that thought!

Ok--to give you some background of the scene that we started the video with--now, Jax joins with the protagonists to execute a plot wherein he brings them in as prisoners to these bad guys, called The Crimson--a group of elves trying to eradicate magic (we’re not getting into that, but that in itself has all sorts of interesting connotations).  He arrives at the Crimson’s fortress with the prisoner.  There’s some debate about whether to pay him or not, but finally, the head of the guards, a blond-haired elf, takes the bag of gold he owes Jax and throws it beyond him.  He says, condescendingly, one simple word:  “Fetch.”

Now, in the US, and many places in the world, when a white person tells a person of African descent to “fetch.”  Your ears should perk up because it is not a neutral term.  Fetch is what we play with dogs.  Fetch is a command.  Fetch has the connotation of a master-servant relationship.  It calls up a substantial history of the dominance and exploitation of African Americans by white Americans throughout the last four centuries.

So what does this mean?  It can mean many things depending on where you put emphasis.  We can look at it blindly and just say that it is merely how elves would speak to humans or how fanatics would speak to mercenaries--they are antithetical people in many ways.  That makes sense within the story.  But the pop culture scholar is likely to read that differently.  The dialogue created is not neutral; writers work away at developing each scene and thinking about its relevance.

Therefore, the writers made a choice on that word and one has to wonder what informed it.  Was it informed by a diverse or a diverse-minded writing staff that thought to make this scene feel differently?  Was it a decision not consciously considered but felt obvious to the writers once they knew Jax would be black? In using “Fetch” were the writers (intentional or otherwise) invoking the caricatured African American persona of “Stepin Fechit”, a trickster and lazy stereotype that’s been used over the course of the 20th century?

Could this be hinting that indeed, racial tension and white supremacy as we know it today--has not somehow disappeared in the future?

There are interesting questions to consider and think about and brings me back to a key point about studying popular culture.  There are many ways to study it but one way that we get some of the richest understandings is by looking at the context--the times, the histories, the other influential factors, the limitations, the codes, the morals, etc--and intersecting that with the connotation--that is, understanding that there are the straightforward meanings and the real meanings behind that.  We demarcate between the denotation (the given meaning) and the connotation (the implied) all the time.

That was quite the meandering path, right?  Just to talk about this 20 second scene within a TV series, I went into a history of epic fantasy, delved into the considerations about adaptation, discussed racial depictions in fantasy, considered the complexity of modern television, and raised some questions about how such scenes are composed by thinking about writers, denotation and connotation.  That's why I love pop culture--there's so much to talk about!

So that’s this weeks insight into popular culture.  What about you, did you have any interesting thoughts about it?