By Lance Eaton - September 08, 2017
Another month of delightful reads has come and gone and here are what I consider to be some of the highlights.  What about you?  What kind of great reads are you finding?  I'm always looking for good recommendations so please let me know!


The Fuzzy and the Techie: Why the Liberal Arts Will Rule the Digital World by Scott Hartley


Hartley's makes a mostly convincing argument that there is increasing value in the pursuit of liberal arts education and that critical insight into human nature that liberal arts help to hone in humans that will be essential as we become a more technological society.  In conjunction with various research he provides on the value of a liberal arts degree, he provides innumerable examples of people with liberal arts degrees or background make substantial breakthroughs in the launching of a variety of technological tools and projects.  As someone with a liberal arts degree and a value for the pursuit of liberal arts studies in our culture, I appreciated Hartley's arguments.  However, one failing of the book that I found and wished he had worked harder for was his over-abundance of examples from students that were at elite or Ivy League colleges and universities.  Rarely were smaller state institutions or lesser known private institutions invoked and never do I recall hearing any mention of a community college.  In conjunction with that, I found that he sometimes oversold the person's liberal art studies when it turned out to be just a course or two.  Coupled with that, it also seemed that the book probably should have been titled, "Why Liberal Arts With Additional Technological Training Will Rule the Digital World" since, again, nearly everyone he discusses had or had to pursue some additional technological training in order to use their liberal arts education.


A Colony in a Nation by Chris Hayes


Hayes' book highlights a concept that is fundamental to understanding the US culture today and that is the division between law and order.  While articulating that law and the protection of the law are important, Hayes divorces "order" from the standard "law and order" to challenge the implications of a society that demand order in the numerous ways that our society does.  Hand in hand with this, he connects that argument to the concepts of colony and a nation; those who belong to a nation where law and order are not disruptive but positive parts of people's lives because while the law-part keeps them protected, the order part means they don't have to deal with things they don't want to (loud neighbors, homeless people, anyone that can be claimed to be causing disorder).  However, then there is those who live in the colony; typically, marginalized people, though plenty of white people fall into this category as well.  He draws this analogy from, of course, our colonial days and the difference in what it means to be a British colonist and a US citizen.  It's a striking analogy as he provides examples and arguments for the ways in which it works and perpetuates injustice in our society.  For those looking to understand the underlying tension and contradictions of a society that's masturbatorily ecstatic about freedom, yet has the highest incarceration rate in the world. 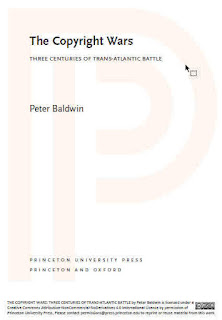 Ok, so a book about copyright sounds utterly uninteresting to most people.  Why not an epic poem about curtains or an opera about nail-clippings?  Seriously, it's not that bad and in fact Baldwin's book explains a great deal things about the origins of copyright, why it so damn complicated, and how it has been shaped in the United States, the United Kingdom, and Europe through interactions, trade agreements (and disagreements), and competition among the different countries. It's a history that to the emergence of printing as an industry and explains the origins of our most basic understanding about copyright, discussing such topics as what it means for a work to be inalienable (or alienable), what is the public's interest in protecting copyright, where did moral rights come from (and evolve to), etc.  It's expansive in its coverage but clear in its detail.  For anyone trying to grasp the complexity of copyright and why it is so problematic, Baldwin's book is a great route.  Overall, I enjoyed the book though found at times, while the research was solid, he took time to editorialize and critique things that were a bit out of the purvue of the book.   However, Baldwin actually offers a digital copy of his book for free on ResearchGate so if it is a text that may be of use to you (here's looking at you, librarians, scholarly communication scholars, lawyers, etc), you can always get it online.


The Age of Selfishness: Ayn Rand, Morality, and the Financial Crisis by Darryl Cunningham

Cunningham's book is a great primer on understanding the rise of libertarianism, Ayn Rand, and the impact it all had on the financial crisis of the late 2000s (and in all likelihood, future financial crises as well).  Cunningham starts with an exploration of Ayn Rand and her life through the 20th century with its mixture of contradictions (arguing for the individuality of thought but then disregarding and disowning anyone who did not believe her philosophy) but also how she impacted Alan Greenspan (who plays a major role in the financial crisis).  He follows this narrative with one that lays out what happened in the financial crisis and how it is connected to Rand's ideology.  The final section addresses the question of selfishness, which stands at the cornerstone of Rand's ideology and increasingly is the banner of both the Republican and Libertarian parties.

Check out other reading recommendations from 2017 (and you can always look at all of my books that I've read on GoodReads):