By Lance Eaton - April 10, 2017
Another month, more books!  We know that's how it goes here and I've had some really fascinating reads as well as one, painfully-bad read (FYI: Cop Under Fire; easily assuming worst book of the year in my book for numerous reasons; I won't be reviewing it because I'd rather not give it any more attention than it deserves, but you've been warned).  I feel a bit behind with reading this year in terms of how many books (just over 40) for the first 3 months of the year, but there's little I can do about that given the program.  Oh well!  So let's get cracking! 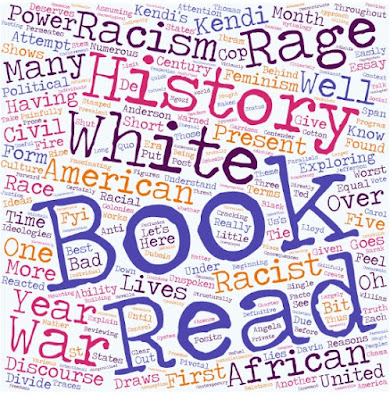 Stamped from the Beginning: The Definitive History of Racist Ideas in America by Ibram X. Kendi

If there is a single book that can structurally explain how racism permeates the history and mythology of the United States, then Kendi's book is if not the book, then certainly a contender (having not read all of them, I cannot say, but having read many books on race, this one is among the best).  Kendi traces the history of the United States' approach to, discourse on, and political consequences of racism from the colonies in the 1600s until the present.  He does this by exploring the lives of five pivotal figures in the history of racism who span all five centuries of US history: Cotton Mather, Thomas Jefferson, William Lloyd Garrison, W.E.B. DuBois, and Angela Davis.  Kendi posits three ideologies that are found in various forms throughout the history and the works of those with whom he presents: racist, assimilationist, and anti-racist ideologies.  Ultimately, Kendi's power lies in his ability to tie the individual lives to the contemporary discourse of the individuals' time while also drawing parallels to and building a mounting context for understanding racism in the present.


White Rage: The Unspoken Truth of Our Racial Divide by Carol Anderson

Anderson skillfully deconstructs an unspoken but prevalent theme in the US history of race relations since well before the Civil War: white rage.  Directly and indirectly, she shows how the often stereotypical assumption of African-Americans as being unwieldy or out of control (that is, having "black rage") is largely a matter of projection of a white rage.  White rage has historically over-reacted to each attempt by African American and other marginalized peoples to establish an equal footing as put forward in the US's founding documents.  Thus, she shows from the Civil War to the presidency of Barak Obama, how viciously and brutally dominant white culture has reacted.  Whether it was de-facto enslavement for unemployed African Americans in the post-Civil War era, the rise of segregation, the intentional exclusion of compensation for African Americans who fought in war, the attempts to shut down or create private or charter schools in the absence of desegregation to unequal sentencing (or due process) in the justice system to systematic attempts to limit their ability to vote, white social, cultural, and political power has actively sought to see equality as a threat to the status quo and been willing to take innocent lives and freedoms to maintain and perpetuate this power and racial divide.  Anderson's makes that provess entirely clear with accessible prose that provides specifics but does not inundate readers with unnecessary details.


We Should All Be Feminists by Chimamanda Ngozi Adichie

Adichie's short book (what's the equivalent of a novella in nonfiction?  Long-form essay?) is a collection of short essays that stem from her TED Talk exploring how and why feminism is a necessity for all societies.  She connects her personal stories and experiences to the larger discourse on feminism and draws useful analogies for many to understand and appreciate about its place in the 21st century throughout the world.  It's a quick read that can refuel some while also introducing complex considerations about feminism to someone just exploring it for the first time.

Check out other reading recommendations from 2017 (and you can always look at all of my books that I've read on GoodReads):