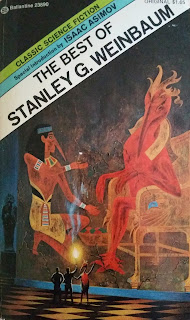 Jarvis is one among four who are the first to travel to Mars in this classic science-fiction tale from 1934.  He is recounting his tale to his companions after surviving a strange and wild adventure.  While exploring Mars, his transportation fails and he's left trying to get back to his companions across a wide expanse of Mars.  Early in his travails across this unexplored world, he encounters Tweel, a birdlike bipedal who is intelligent and from an advance civilization.  Their ability to communicate is limited but the two work together to make their way across the strange landscape and creatures.  Along the way, they encounter pyramid-creating silicon beasts, semi-sentient grass, dream-beasts, and creatures ceaselessly filling their carts to feed some machine.  Together, Jarvis and Tweel mostly avoid calamity until they disturb the unnatural cavern where the machine sits that the creatures feed.  As the creatures pursue Jarvis and Tweel, they find themselves in a stand-off they are unlikely to win but are saved at the last minute by a crew member.

On face value, the story can appear to be just a typical space adventure--the eponymous "odyssey".  But, albeit briefly, Weinbaum makes this tale more align with the epic Odyssey by Homer in that it is not only about a man trying to come home and the strange and alien beings he encounters, but it is also about befriending and working together with a complete and utter stranger.  Tweel and Jarvis are different creatures but their collaboration and willingness to trust one another results in the richer lives and endured safety.   As an alien-first-contact story, it provides an interesting alternative to confrontation and offers connection despite differences.