By Lance Eaton - February 03, 2017
Given that January was a month in which I was not in class, it will surprise few that I read a decent amount this month and many of them were phenomenal reads; a great way to start the year!  There were a lot of great books to discuss but I will restrict my posting to just a handful and I'll be curious if anyone can see a theme.   Feel free to ask me about any of them if you're looking for recommendations.

Wise's memoir of his own awakening to systematic racism in the United States is a powerful and useful tale for white people to read and reflect on their own experience.  From his early upbringing in the south to his education in New Orleans and early days of activism against the David Duke campaigns in the 1990s, Wise explores the ways in which he has succeeded and failed in being an ally to non-white people.  But what Wise does best throughout the book is to mark with clarity the ways in which the privilege afforded him by being white created opportunities or nullifed threats that would have existed for him, were he not white.  Additionally, he is great at unpackaging the ways in which investment in whiteness doesn't harm just non-whites but does damage to white people as well.  For anyone looking to better understand how one can strive to address and engage with the racial strife in this country, Wise's book is a great start.

These three graphic novels capture John Lewis's first-hand account as an activist in the Civil Rights Movement of the 1960s. From his upbringing in Troy, Alabama to his entrance into college and earliest political experiences, the story provides his bird's eye view and experience in striving for a nonviolent revolution in the face of overwhelming white supremacy, oppression, and violence. His experience in the 1960s is paralleled with the inauguration in 2009 of President Barak Obama, providing a beacon to the harsh and vitriolic culture to which both Lewis and Obama (and for that matter all African Americans) were (and continue to be) subjected to. Through the three volumes, Lewis touches upon the leadership of the Civil Rights Movements, the different factions, and the challenges of trying to find the best courses of action to take. The book is both a history and a primer on attempting to change a racist culture that is worth reading for those interested in autobiographies, history, African-American studies, and organizational and cultural change. It would be fascinating to see a volume 4 that parallel's Lewis's experiences with the cultural backlash of the 1970s & 1980s that goes hand-in-hand with the inauguration of Trump. 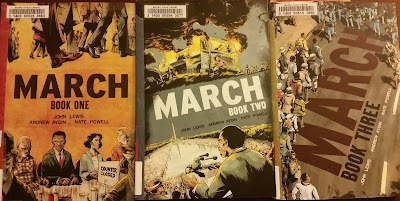 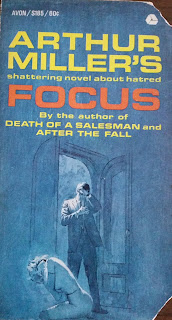 I came across this novel in a used bookstore and thought the premise sounded fascinating, especially since I've been a fan of Miller's dramatic works.  The story follows Lawrence Newman after he awakes in the middle of the night to hearing a screaming woman being assaulted.  But since the woman is a minority, he largely seems to pay it no mind.  The bachelor enjoys a home in a white Christian neighborhood and works in New York City and is largely successful until his eyesight gets the best of him and he's forced to get glasses.  His glasses, as he feared, make him appear more Jewish in the race-obsessed world of the World War II 1940s.  What follows is Lawrence's demise as those around him increasingly suspect him to be a Jew and he becomes subjected to the same cruel realities that he perpetuated just months before.

Miller's tale is a classic tale of what it's like to live in another man's shoes but also well layered with reflection by Lawrence as he comes to weigh the meaning behind the white supremacist view and how easily it insinuates itself into the minds of the privileged.  Originally published in 1945, there is so much about this book that resonates with the world today that it could have easily been written as today with only slight adjustments.