By Lance Eaton - December 31, 2016
At the end of each year, I take some time to look at and consider what are some of the goals I sought out for the year and what have I actually accomplished.  I did this with 2015 and set my goals for 2016.  My goals for 2016 were a mixed bag but my achievements for 2016 went well beyond what I set out in writing.

Let's first look at what I set out to do:

Yes!  I totally nailed this one with a daily practice of giving thanks to different aspects of my life.  I will be writing a longer post on this but I definitely hit this one between the daily practice of acknowledging things to be grateful for and then also writing a letter once a week to thank someone in my life. 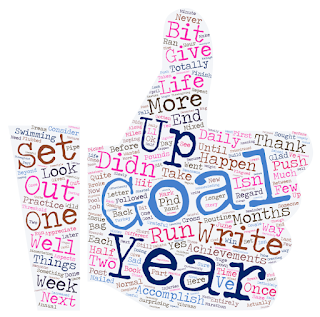 So I didn't cross the 1500 threshold as I had an IT band issue that plagued me for months until I had to give up my Vibrams (still sad about that).  However, my two other running goals were totally accomplished.  I not only ran a 1:52 half-marathon in June (followed by a 24:30 5K two weeks later), but I also broke the 40-minute mark on my 5-miles, coming in at 39:59 on the annual Wild Turkey Run on Thanksgiving.  That win was particularly amazing after not running for a few months because of my injuries.

I have gotten about half-way into a short story but have not done as much writing as I had wanted to--though given how much writing I'm doing for my PhD, that isn't entirely surprising and might be a bit of a pipe dream until I complete the dissertation.

This didn't happen and like the writing, may not happen in the next few years for the same reasons.

So the following are accomplishments that I didn't set out to do at the beginning of 2016 but picked up along the way.

After creating a daily reminder towards the end of 2016 to do 10 push ups a day, I slowly increased it by 5 every couple weeks and now can (almost) effortlessly do 50 push ups.  Not a huge goal, but that I have never been able to do this before, it's something I certainly appreciate.

Ok, we'll have to reassess this one after the holidays for sure--hahaha.  But I started Weight Watchers in April and it has been quite useful.  I got down about 20-25 pounds and came back up to the 15-20 during the fall semester and winter break and will resume to a normal routine once life is back to a normal routine.  But it has been a great adaptation that has been quite helpful throughout the last 8 months.

Most of my accomplishments this year were of a physical nature, which is not entirely surprising in that, it's the one with the most flexibility.  My intellectual goals are largely focused on the PhD program.  However, I am glad that I did manage some emotion goals with regards to learning to be more thankful and appreciative of the things in my life.  My achievements for next year will hopefully be a bit more balanced!  Regardless, I am glad that I was able to accomplish the things that I did and see those that I didn't as just something I need to reconsider and reconfigure to determine why these goals didn't happen this year and can I make it happen for next year.

What about you?  What were some of your goals and achievements for the year?  What are you setting up for 2017?

By Any Other Nerd Blog by Lance Eaton is licensed under a Creative Commons Attribution-ShareAlike 3.0 Unported License.
goals health training