What Am I Doing...Actions Taken

By Lance Eaton - November 12, 2016
So in my last post, I said that the election for me and anyone else that was not something they liked in terms of its execution needs to do something to avoid it happening in the many problematic ways that it played out.  How's that going for all of us?  What are some of the action items you've taken up in the last few days?

Here's my run-down of what I've done thus far:

I voted, of course but I also wrote the initial post from the other day that has got me going down this path of thinking about what to do next.


November 9:  A Day of Mourning & Reflection 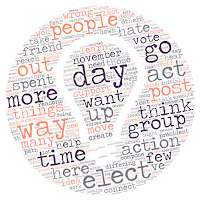 I stayed up through most of Election night and had trouble sleeping (maybe 2 hours that night).  Wednesday was a really hard day for me.  It was spent in a bit of a haze.  It was spent shedding public and private tears and commiserating with friends.  I cried because the loss to me represented so much that was wrong--wrong with how the election was fought and the differing reasons why those who lost, lost and those who won, won.  It was navigating a path of sadness and frustrated and fear and not letting that turn into hate and anger but into actual things that I can learn and do better by this.  It was looking in the mirror and doing my best not to villianize those who are not us.  There are many things I feel that I am right about (e.g. caring for the equity, equality, and fairness of all humans) but recognize that I have gotten a lot of things wrong in how I go about it.

I spent a large part of my free time on this day reaching out to as many people I knew that were as heart-stricken or felt particularly threatened under the rhetoric that President Elect Trump voiced.  I wanted them to know I cared about them and that I was there to help.  In my own mind, I spent the day thinking about what it means to connect and how to engage in action that is meaningful to move foward.  I realized that I and others would need some group support and guidance so I created the Time to Act group on Facebook to help people (including myself) to find guidance, support, and feedback on how to move forward.

I spent time further wordsmithing the purpose and setting up the Time to Act group before launching it and inviting friends who I thought would be interested in joining or learning from.  Since then, it's up to about 500 members and more people are joining and inviting others.  Beyond that I also began to work with a good friend of mine about looking at an opportunity to reach out to the Electoral College (we began talking about this on the 10th actually).  A petition started int he past few days had us thinking.  The petition is an attempt to get the people that compose the Electoral College to change their vote.  It is an absolute moonshot to convince them but at the time of this composing, over 3.5 million people had signed it.  I also had conversations with my partner about the actions we wanted ot take together in the days to come.

And today.  Today has been a mixture of engaging in idea-exchange with the group; composing a list of groups I wanted to monthly donate to, working with my friend in the above-mentioned project, and forming a plan for the days ahead.  It's getting energize by hearing from others in the group about the actions they plan to take and thinking about ways to better understand and connect with people that are different from me.


Where am I going from here?

So now I'm off to think about more ways to act and seeing what are things I can do each day to act.  As I execute or explore new methods I will be definitely sharing them here on this blog but also within the group mention above.

I provided some initial ideas in the previous post about what to do.  Here are some more personal actions that people can take in the aftermath of the election.

It's Not About the Candidate

I'm already writing a blog post about the issues around the election, my emotions, and things I'm reconsidering. But I want to be clear about my views on this. I'm not necessarily hateful towards the President Elect. I ultimately want him to succeed because his failure will do even more harm. However, it is undeniable that he used a range of hateful and fearful tactics that increased the vulnerability of groups that were already subordinate in our society. In the days since the election, hate groups and individual bigots have seen his election as a justification for their disregard for human decency and respect. And for that, I do hold the President Elect accountable for, especially since he had done nothing significant to quell the hatred.

That's all for now!  I'd love to hear what everyone else is doing and hear more about your ideas.

By Any Other Nerd Blog by Lance Eaton is licensed under a Creative Commons Attribution-ShareAlike 3.0 Unported License.
activism culture election politics