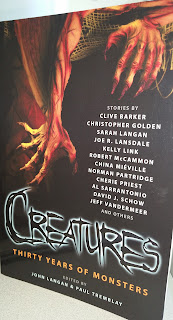 After years of fighting other monsters, Godzilla is on the path to recovery, trying to use his might and fire-breathing abilities to do right by the world.  But he struggles a lot.  He doesn’t necessarily have it as bad as other monsters such as King Kong who seems so absence of wit, he only wants to play with Barbie dolls all day, but he does find it a daily struggle not to go on a rampage.  He does have entertainment and an opportunity to let steam out but it doesn’t really match the chance to wreck cities.  His sponsor, Reptilicus, tries to help him through the rough times, but Godzilla falls off the bandwagon after Gamera shows up and starts taunting Godzilla.  The stress builds and Godzilla eventually gives in, obliterating a dog.  But that sip isn’t enough and eventually, he goes on to ravage a city. Before it gets too far the government steps in and offers a devil’s deal.  He can destroy cities, but it must only be cities or parts of cities that they insist on.  When he’s sent to wreak havoc on the part of the city where African Americans live, he rebels and destroys the part of the city where the government is positioned. So fierce is his attack that other monsters join in, while Reptilicus attempts to calm and capture Godzilla with the help of the army.  Though Godzilla is dead and Reptilicus basks in the fame of helping to bring him down, he too begins to hear the call of his inner monster.

Such a fun yet morose tale to start of this anthology.  On the one hand, humanizing Godzilla to the point where he’s watching TV and doing human work plays out to some interesting moments, and yet, the monotony and dreariness of Godzilla in a life of repetitive work that seems far from his life’s desires makes a pretty shallow metaphor for human existence and people who find their lives meaningless and ultimately lash out.  Framed in the world of the twelve-step program, it also helps to humanize the struggle substance abuse in the sense that it becomes a self-destructing calling that doesn’t just impact the user but also impacts and even influences the abuser’s friends down similar paths.


For a full listing of all the short stories in this series, check out the category 365 Short Stories a year.