By Lance Eaton - August 21, 2014
July was definitely a slow month for completing books.  In large part this was because I am teaching an American Literature 2 course wherein I'm using a lot of new material so my time reading time has been eaten up by reading all of that (conveniently this means I am also way ahead on my 365 Short Story project).  So I definitely got in plenty of fun and interesting reading which was nice but not so many books--I'm sure I'll make up for that in due time.
Despite it being a short month of reading I've still had some delightful books worth mentioning.

Doctor Who: A History by Alan Kistler

I did not get into Doctor Who while growing up and even with the series reboot in the early 2000s, I largely avoided it.  However, a friend got me to try Torchwood and I really enjoyed that towards the end.  So I started to flirt with Doctor Who and was slowly making my way through the show.  David Tennant was growing on me but I still wasn't sold on the show--it was something to have on in the background while playing games and such.  Then, I listened to Alan Kistler's book and that changed pretty quick.  Kistler provides a keen history of Doctor Who from inception to it's forthcoming new doctor (the 12th) and strikes a great balance between the background of the show such as the actors, the writers, the politics of it all and explaining the ongoing character development of the doctor from season to season and from doctor to doctor.  It's a complete joyride for fans and for those who are interested in fully understanding Doctor Who without having to watch (or re-watch) all the older episodes (though I will likely do that at some point).  It's clearly a work of passion and one that readers will definitely enjoy if you're looking to know more about Doctor Who.

I've always been fascinated by the Jekyll/Hyde dynamic and since reading the original novella several years ago, I am increasingly fascinated by all things related.  I loved the BBC version of Jekyll with James Nesbitt and enjoyed both the movie and novel by Valerie Martin of Mary Reilly.  I've seen lots of versions of Jekyll and Hyde and my favorite still remains to be the 1932 version with Frederic March. Hyde now gets added to that list of favorite renderings of Jekyll and Hyde that I've read or viewed over the years.  It's a well-told tale that provides some fascinating layers to the Jekyll and Hyde dynamic while offering the point of view of Hyde which is so often neglected or rarely humanized in the ways that Levine does.  Levine raises some fascinating questions about Jekyll that I appreciate since they are ones I often raised when I have taught the text within a class.  Additionally, Levine has clearly studied Stevenson's tale to make sure everything fits and there are no cracks.  He aligns everything with the novella's events which allow for a seamless narrative that even the biggest fanboy would have trouble finding fault with.

In His Own Words by David Foster Wallace 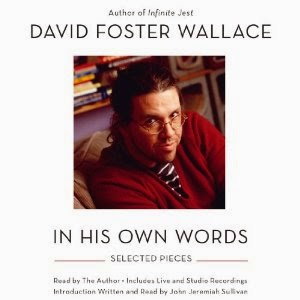 I've never read much of David Foster Wallace, so when I was given this as an audiobook to review, I was a bit curious because I had heard plenty about him and have several literary friends who big fans of his.  This collection of essays and interviews was a great introduction to his work.  I listened to the audiobook, which had the added benefit of having him narrate all of the works himself (or fully recorded interviews).  My favorite was "This Is The Water," which I have incorporated into my American Literature course as well as "Consider the Lobster."  However, many of the pieces were quite fascinating, especially to hear him discuss the significant of Infinite Jest as well as his commentary on suicide given how he died.  Having never read his fiction, I'm not rather inspired to which speaks well to this collection of essays.

For other best picks over the last year, check out previous monthly reviews:

What have you been reading lately?  Got any good recommendations for books, audiobooks or graphic novels?