Short Story #2: How Old Timofei Died With a Song by Rainer Maria Rilke

Title: How Old Timofei Died With a Song 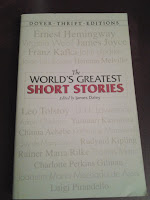 The narrator  is telling a story to a paralyzed man about a famous singer of songs named Timofei in Russia.  The narrator explains that songs are passed along from generation to generation and when written down lose some of their power to move people.  The narrator retells Timofei's tale in that his son ran away with a servant girl leaving him the singer all along in his older years.  As the man closely approaches death, the son returns after having ditched his family.  He learns some of the many songs the great singer has in him but eventually, the father dies and the son is left to become the singer.  When the narrator finishes, the paralyzed man asks why the son never retrieve his family (since Timofei was the reason for the son not bringing them back).  There is no answer to this but the narrator notes that the son died alone.

I liked the oddity of this story.  I haven't too much Russian literature nor German for that matter (the anthology marks Rilke's story as a story from Germany, but clearly it has a strong Russian focus) but this story seemed to have exotic elements of Russian fiction.  Right from the first line ("What a real joy it is to tell stories to a paralyzed person!"), it grabbed me.  The line itself made me wonder if this was going to be a story akin to something Poe would write but instead, it was a much more humbling and basic story (basic in the sense that it represented a near-universal element of human fret, loneliness and isolation).  There's some fascinating parallels that occur in this story between the narrator and his fascination with the paralyzed man and the problematic relationship between Timofei and his son (who ends up alone).  I also liked the nod to oral tradition and the challenge of preserving oral tradition from one generation unto the next and how that is a very delicate chain.