By Lance Eaton - December 03, 2013
The tally of books is in for November and I crossed the finish line of 368 books.  I'm going to obviously keep going for December--mayhaps I'll hit 400 books this year. It's quite possible at this point!  Unfortunately, there were no physical books read this month either--just audiobooks and graphic novels.  But given that I was finishing up my Master's Degree and writing the report on that, it is of no surprise.  I anticipate I will be better in December with traditional books.  However, I'm happy with my 34 audiobooks and graphic novels for this month.

For next year's challenge, I'm definitely leaning towards reading a short-story a day and blogging about each.  I already have my anthologies lined up.  But we've still got one more month to go and I hope to make December a great note to end on.  In the meantime, here are the highlights from this month's readings:

Trust Me, I'm Lying: Confessions of a Media Manipulator by Ryan Holiday

My friend and colleague, Rob Weir has succinctly summarized this book on his own blog before I could.  In many ways, it is a valuable read that provides some insight into the blogosphere and modern news media.  However, it's also at times feels more like bravado than confessional and there is definitely elements of trustworthiness when it comes to Holiday's self-proclaimed feats.  But all that being said, he does emphasize the superficiality of an online media system that relies on page-clicks and ad-views, and not reliable content.  In fact, I think his argument that getting the news wrong is almost as valuable as getting it right because it means a site gets more stories and thus more page-clicks (and therefore more revenue) is probably not far off the mark at times.


Writing on the Wall: Social Media - The First 2,000 Years by Tom Standage

I'm a fan of Tom Standage's work.  He captures history in some rather fascinating ways and connects it to the everyday life of people in unexpected ways.  Writing On the Wall is no different and of course, more dear to my heart as he meticulously traces the history of the characteristics of social media far back to ancient times.  He identifies the various ways in which humans use and engage with social media today (along with the how the mainstream culture questions, values, and devalues these exchanges) and finds their historical analogs.  We find Circero telling his informers to write him letters even when there is nothing new to write as well as the graffiti-laden walls of ancient cities, not just filled with irrelevant messages but advertisements, lovers' exchanges, and other content that holds meaning.  It is an argument that I greatly appreciate since I also see that though there is change of format, there has not necessarily a change in the style, approach, and meaning of human exchange.

Modern Scholar: How to Think: The Liberal Arts and Their Enduring Value by Michael Drout 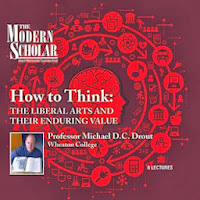 I willingly admit that I am a total fanboy of Michael C. Drout's work.  He is the author of several lecture series from Recorded Book's Modern Scholar line.  His lively voice, amusing asides, and excitement over nerdy things add a level of interest to the lectures that other Modern Scholar lecturers seem to miss.  This lecture series is no different as he delves into the history, the values, the importance, and the problems with the Liberal Arts as a major centerpiece of modern education.  It's worth a listen for everyone who works in the liberal arts and more so for those who wish to devalue (and ultimately, defund) the liberal arts as it provides a good strong explanation as to their cultural importance.

So there are my highlights from this past month.  For those keeping track, here's the full list of books thus far (or check it out on GoodReads):