Tales of Running: Battle Won and on the Path to Victory, or My Amazing 30K

By Lance Eaton - September 30, 2013
I'm still awed by my performance that the 30K run I did on Sunday, September 29, 2013.  Maybe that sounds a bit conceited.  I don't mean it to be.  My mind is still reeling from the accomplishment.  That I could do a 30K still shocks me even though I did it last year.  But that I did the run today in a personal record time that I didn't think I could do, just leaves me awestruck. 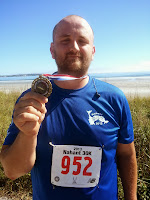 I should mention that I cried twice during this run.  I couldn't help it and truth be told, I didn't want to stop it.  I've talked about crying while running before.  It's just something I do.  Somewhere between the physical exhaustion and the mental realization that I am doing something that for much of my life I thought was not only crazy to do but beyond my ability, I'm overwhelmed with the fact that I am not only doing it, but actually enjoying it.  And so the tears of joys and the heavy sobs are signs of pride.

I have much to be proud about in my running of late.  The last few races that I've actually done, I've had great success.  I had to skip the Wicked Half Marathon from last week because of other obligations, but I did manage to have a hard run this week.  I ran 6.5 miles at a 9-minute mile pace.  I know that will never break any levels of success.  But much of the summer, my runs of 45 minutes or longer were somewhere between 9:30-10:00 minute miles.  I sometimes would do better if it was a road race, but my own runs, never really dipped below that.  However, this past week, I destroyed that record.

Great as this was, it was a shadow of the 30K accomplishment.  Last year, I suffered through this run. I did it but it was harsh and I walked significant chunks of it.  I also opted for the Sunrise start, concerned that I would be so far behind that the race would end before I did.  I came in at 3 hours 39 minutes.  I was and am proud of completing it.  After doing it, it opened up the consideration to do a marathon and has led me down the path to where I am today.

But today was glorious for me.  I nailed this race beyond what I thought possible.  On Facebook, I said that I'd aim for 3 hours 20 minutes, but I had hoped for 3 hours 10 minutes.  I came in at 3 hours and 55 seconds.  I carved 39 minutes off my run in the last year.  In fact, at the 13.1 mile point in the race, I was around 2:06, which means I even shaved 3 minutes off my best half-marathon time.  The significance there is that I have shaved off 35 minutes from my half-marathon time.  This is important because I think one of my own goals in the next year or two is to get under the 2 hour mark for the half marathon and it's clear that it is definitely an achievable goal.


I had contemplated doing the Sunrise start again, but decided I would start with the other runners and aim for under 11 minute miles (which was the cut off point between the regular start time and the sunrise runners).  It was clearly the right decision.

There are many thoughts and experiences surrounding this run for me.  Some of which are clear such as watching the lead pack of runners past by at several points in the race (there were several places where doubling back occurred).  They glided by me at a pace I will never know but every time they did past by me I did find my step pick up and found the strength to push a bit more through the race.  I'm not envious of them for their skills--I'm often in awe of them.  And though I will never know their speed, I do get the distanced and determined look in their eyes as they move their bodies.  There's the herd of people I regularly jockeyed with throughout the race.  Many who pushed me and many whom I pushed, getting ahead, falling behind, going step for step, none of whom I know, but all of whom I'm thankful for.

I did the right things for this race again.  I spent a lot of the week leading up to it, visualizing and running hard in my mind.  I rest up and fueled up well in the morning.  I stretched and gave my mind the inner peace to prepare for the trek.

But one tactic that I haven't talked much about but have taken advantage of is receiving reiki the day before my runs.  In fact, I've had regular sessions of reiki from Mindful Reiki Healing and it has had a wonderful calming and centering effect that has worked wonders with the mind-game that makes up much of running.  Receiving reiki in itself is a rewarding and peaceful experience.  However, in conjunction with such physical challenges, I have found it gives me something else to call upon and center me as the running continues and my mental capacity diminishes.

In all, the run was a great accomplishment that I'm still smiling about.  It gives me a lot of hope for the marathon (in 3 weeks) and is quite rewarding to see the work paying off.  I have one more half marathon before the big race which I'm looking forward to (again, sentences like that still make me laugh and think "Who are you?").