What I Learn from My Cats Part #1

By Lance Eaton - February 27, 2013
Yes, we knew it was going to happen.  At some point, I would blog about my cats.  I'll reserve rambling on about how adorable they are--we all know there are hundreds of pics on my Facebook that illustrate this truth.  Instead, I want to talk about what my cats have showed and taught me over the last 18 months since they first came into my life. To be sure, I haven't had any epiphanies per se, but I've definitely found my perception informed by my interactions and caring for them.

First, let me introduce them. 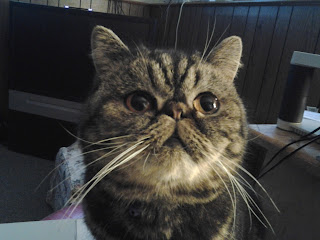 Pumpkin is a short-hair Persian cat.  I got her in August, 2011.    As you can see from the picture, she as a "smooshed" face.  This can make her look both wonderfully adorable and somewhat perpetually grumpy (which then feeds into her adorableness).  She's a small cat, weighing in at about 7 pounds.  She's also a bit more timid and skitish.  I think this in part comes from her size and her lacking snout.  She doesn't appear to have the capacity to be a good fighter and regularly loses in her (playful) tussles with Bear.  Her smooshed face means, she doesn't have particularly great jaw strength and an extremely small nose also interferes with her ability to smell as well as other cats. She is not a cat that will do well out in the wild. 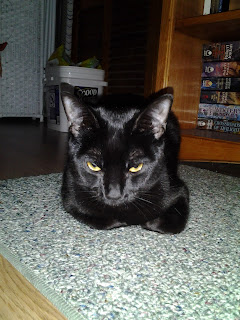 I don't know Bear's breed; I'm guessing "mutt."  I was given her by a friend in June, 2012.  She's all black, which apparently are the least liked.  Yet, I find her an absolute delight and maybe all of this black cat crossing my path is actually accumulating good luck.  At ten months right now, she comes in around 9-10 pounds.  Of course, when she pounces on me, it can feel like 30-40 pounds.  She's still in her kitten stage in many ways.  She's continually playful with me and Pumpkin.  She continually wants to be on my lap or near me when I'm sitting or lying down.  She's also a headbutter, which I absolutely love.  When I come home at the end of the day, she will find the nearest counter to me and get up so she can headbutt my chin and purr--loudly...like a motor boat.  She's also has determined (and achieved) herself to be higher in the hierarchy than Pumpkin.  This is apparent when I may be lying down with Pumpkin on my chest and Bear comes in and nudges, paws, or pushes Pumpkin out of the way so that Bear and sit on my chest.

First and foremost, I've learned how awesome cats are.  They get such a bad rep by many and growing up without any cats, they were unfamiliar.  My only experience would be with street cats that would run away and/or hiss.  Friends' cats never seemed entirely friendly and I always felt like an intruder in their presence.  But first Pumpkin and then Bear relieved me of such thoughts.

Who knew that they had such distinct personalities and quirks?  Well, besides everyone whose ever had one, right?  They do entail different means of interaction.  Bear is always underfoot and next to me, wanting my undivided attention, except when she's sleeping.  Pumpkin is more elusive.  At times, she's a bit skittish and if I move towards her, she darts away.  At other times, she roams the apartment crying out for my attention until she finds me.  She looks up at me with that adorable smooshy face and lets out a cry that just melts my heart. 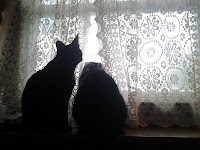 She's done this enough that Bear too seems to have learned the trick and regularly cries out to me.  I think that was one of the biggest surprises.  I knew that cats meowed and a friend of mine even had a cat that downright talked when scarfing down her food.  But both Bear and Pumpkin cry out for me regularly to get my attention.  In fact, Bear does this when even when she is two feet away and as best as I can interpret it, it seems to be a cry for attention because as soon as I start petting her or holding her, she goes right into hyper-purr mode with a purr that sounds like a motorboat.

Both have a great inquisitiveness that's fun to watch.  They are naturally curious creatures and are continually trying to figure things out.  Even though Pumpkin is less bold than the fearless Bear (except when Bear's scared by the vacuum cleaner--no joke--she hides and trembles with terror), they both are constantly exploring within the apartment and anything I bring in.  Pumpkin is cuter in this regard. As she explores any new or questionable terrain, she's very light-footed and is constantly sending out a tentative paw to explore before stepping forward.  It's cute to see 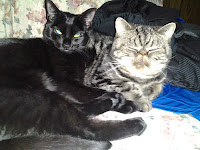 As predators, their desire to be in control of the situation encourages them to find higher ground in the apartment.  I've found them on the fridge, on top of a wicker cabinet (they climb up this all ninja-like), atop a doorway gym, and atop a very narrow ledge of cabinet door.  I keep waiting for the day I come home to find them swinging from the ceiling fan (Gremlins style) or somehow have broken through the ceiling tiles and are wandering the netherworld between my ceiling and the apartment above's floor.

People assume that because cats are not dogs, they lack intelligence on the level that dogs do.  I don't know that I buy this as I find my cats are intelligent and much more manipulative than most dogs I've met.  My mother is quite amusing with my cats.  Early on, she got frustrated because they were not as responsive to her or won't let her hold them when she wants to hold them.  So her response to this has been to give them treats every time she comes to visit them.  What this did to the cats was to train them to associate her with treats and so when she does visit, they instantly bother her for treats (hanging out in the area she regularly delivers the treats).  Thus, they have taught her to give them treats.  Bear and Pumpkin may not roll over but they know how to purposely manipulate the world around them.  Pumpkin and Bear know that if they want my attention when I'm at the computer, they need to come directly into my eyesight and thus, stand in front of my screen.  They know if they want me to play they need to make a noise or distract me with a mess of some sort.  They may lack the obedience of the dog but they are quite intelligent as far as I've seen. 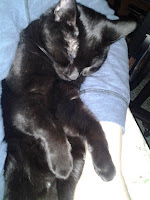 Pumpkin may be older and at least initially was bigger than Bear (Bear is now bigger), but Bear quickly established herself as higher on the hierarchy of the household.  She is constantly by my side and when I lie down at sit down, she is right onto my lap.  Occasionally, Pumpkin may get onto my lap when I'm sitting or onto my chest when I'm lying down to sleep, but Bear always arrives and chases her away to assume her position.  This happens with treats too in that  Bear assumes the right to all treats and then, if there's any left, Pumpkin can have the leftovers.  The only time I see a variation with this is the dry-food feeder.  I do wet food in the evening (to which Bear always takes first dibs).  But when the automatic dry-food feeder goes, Bear always stands back and gives Pumpkin first dibs before jumping in.  It's a curious switch given all the other times Bear seems to be the dominant figure.

Ok, that's it for now--there will be more to come, but these are the thoughts occupying my mind right now.

Scientific Proof that Cats Are Better Than Dogs


#OwnedByCat
So I've taken to posting to the hashtag: #ownedbycat on Twitter about the different experiences and rules one learns as his or her cats come to adopt their human.  Most are silly, but occasionally, I might have a deeper thought of 140 characters.  Here's a Twitter widget for those interested in seeing some of those thoughts:

This work is licensed under a Creative Commons Attribution-ShareAlike 4.0 International License.
cats learning