Top 7 Films That Creeped the Hell Outta Me

By Lance Eaton - October 03, 2010
We’re obviously into “Halloween” season as Boston.com has provided a photo-slide show of the “Top 50 Scary Movies,” a completely arbitrary list that looks to entertain rather than distill a clear and accurate depiction of the best 50 scary movies. While the creators of this show have collected an interesting assortment, it’s just that; a quirky but largely irrelevant collection. They follow it up with the 20 Best Zombie Movies ever made. I’ve watched some 90+ zombie films in my life…trust me, there’s only about 20 good ones (and that’s stretching it) despite the hundreds that have been made. But the folks on the Horror Listserv  (a must for anyone who likes to talk details about horror films) are apt to rip it apart and deliver some 100 more films even better than what Boston.com has.

The most striking and surprising on their scary movies but upon second thought, most agreeable, was Willy Wonka (The original; not the remake). Gene Wilder doing his eccentricity to the fullest; a bunch of Umpa-Lumpas with bad orange fake-n-bake skin tanning, and little children getting their EC Comics-derived “just desserts” and you definitely have something that is rather haunting and dastardly. However, by contrast, the list also included Open Water, a film that hovers in my (completely arbitrary) top 5 worst films ever list.

But we all like lists, so I’ve compiled the Top 7 Films That Creeped the Hell Outta Me. I chose 7, not because it was an especially evil number or to be different; but mostly because it’s 7:00AM and I’ve been up all night. These were all the films my diminished brain could conjure. Bare with me! (And spoilers for sure).

The concept is haunting and I certainly appreciate its attempt to be authentic to John Campbell’s “Who Goes There.” For me, there are just those scenes when the alien lets loose in unexpected ways that threw me for a whirlwind (and this is a film I didn’t see until my late 20s). I remember my eyes bulging when they go to deliver a second charge from the defibulator to the guy on the table and his chest opens up to chew off the guy’s hands. Equally striking and nerve-grinding, the thud-thud of the soundtrack that apparently is there throughout the entire film but sometimes just played very very low.

I’ve been squeamish with the torture-porn run of the Saw films but I believe it is #5 where the last 2 survivors have to push their hands into a saw-blade. Yeah, I writhed in my seat; distorted my face, and fidgeted profusely…and kept watching. But even now as I type and recall it, I keep shaking and making faces. 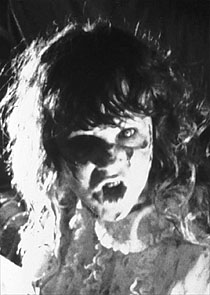 A film I didn’t see until its theatrical re-release special 20th anniversary in 2000 or so. Overall, it was a pretty haunting and disturbing film, but ways in which evil played out on the young girl was impressively freaky. Of course, I think I slipped into the realm of the unreal and stopped remembering it was a film when Regan began to stab herself repeatedly with the crucifix, screaming that “Jesus wants to fuck you.” I know for a fact that I was completely disturbed and way more scared than my date. Probably why there was never a second date.

The inability to actually see something clearly is a central part of my dreaming life. My dreams consist of all sorts of crazy shit going on (half the time at least) and me being completely incapable of opening my eyes or control them in any significant degree; so I’m continually battling and trying to see things and make sense of them; with increasing fear that bad things are going on (I’m driving into traffic, the killer is right behind me; I’ve arrived somewhere in the buff, but can’t see that I’m totally naked). Yeah, Blair Witch Project pretty much turned that into an on-screen experience for me.

It was just a strange and freaky movie to begin with. Two hillybilly brothers, living with their decrepit old mother; it was like Deliverance meets Psycho. Most horrific for me was the ending in which after the mother makes a return when the girl believes she has escaped. When I came back to it years late, and I realized the sexual violence involved; it made it horrific in a whole other sense. And they’re making a remake; I should be surprised. 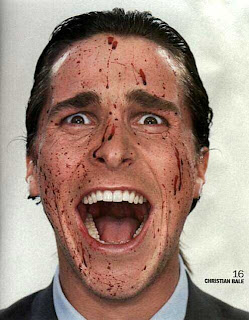 I’ve seen this film no less than 10 times. And every time I watch it, I get to the end and can’t decide whether I really like it or really hate it. It’s filled with some of the most bizarre scenes and uncanny moments. I’ve since read the book and that doesn’t help me any better. I love Christian Bale because he can be a charming Newsis, a swinging Nazi-Youth member, Batman, and a complete and utter psychopath. His power to play charming, dominant, and axe-wielding executive is not to be missed, disturbing as it is.

This Italian film was pivotal for me. It was the film that showed me, you could create pitched moments of fear, without gore, without violence, but with a well-developed and delivered plot. I’ve talked about the book by Niccolo Ammaniti elsewhere on here. The film did keep me anxious and uncertain and worried for the two boys and its use of the countryside works well to exhibit a childhood wonderland of exploration but also the danger and “edge of the civilization” that develops in the second half of the film.


What are other favorite horrorific movies do people have located in the dark recesses of their minds?  What stands out as a powerfully scary film (or film moment) for you?