By Lance Eaton - June 09, 2010
Michael Kimmelman offers some rather interesting insights into the every elusive and shape-shifting idea of culture.    Of course, the definition of “culture” is


“the integrated pattern of human knowledge, belief, and behavior that depends upon the capacity for learning and transmitting knowledge to succeeding generations b : the customary beliefs, social forms, and material traits of a racial, religious, or social group; also : the characteristic features of everyday existence (as diversions or a way of life} shared by people in a place or time c : the set of shared attitudes, values, goals, and practices that characterizes an institution or organization d : the set of values, conventions, or social practices associated with a particular field, activity, or societal characteristic

the act or process of cultivating living material (as bacteria or viruses) in prepared nutrient media; also : a product of such cultivation.” (Taken from Merriam Webster).

And Wikipedia has a rather lengthy entry on the subject as well.

What I find interesting with Kimmelman is that he starts off discussing France and moves into the larger landscape of culture and globalization’s role in cultural development but also emphasizes the fluidity/flexibility of culture.  He’s quick to point out (rightly so) that just because certain cultural products are appropriated by others, it’s wrong to assume they mean the same thing. 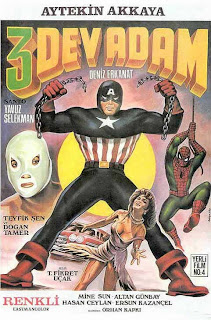 This can be seen in many different places and one of the most curious is the case of 3 Dev Adam, a Turkish film from the 1970s.   The plot is standard melodramatic fare, but the characters are appropriated from US and Mexican culture (Captain America, Spider-Man, and Santo).   With Spider-Man cast as the villain, the creators have taken some other piece of popular culture and reoriented it to their liking which would seems to be standard fare within global cultural exchange.  After all, cultural food appropriation has been a main habit of humans as soon as one culture encountered another.  One of their first questions when encountering a new group most likely being, “What have you got to eat?”

With 3 Dev Adam, the fact that they’ve recreated Spiderman and decided to toss in Santo can seem strange to us; 30+ years removed and also, having no basis for associating the two Marvel superheroes and the wrestler (who happened to be a real living person as opposed to the two fictional characters).  But that matters little at least in Turkey in the 1970s where the film was made.

Equally, intriguing are the series of videos on YouTube featuring a re-dubbed Hitler speech from a film (from what I gathered, it was taken from Der Untergang (2004) ).  Here, too, is something that is mixed and matched with regards to global culture.  The title and the visual cues tell us it’s Hitler at an important meeting during World War II.   As a German film, it’s not immediately accessible to most English-speaking people (and in particular, Americans).  It’s only with the use of subtitles (thereby manipulating the film in some way—adding to it) that it can more clearly communicate its message.  But these films decide to play with the added material.  Indeed, the video is spliced in numerous ways, often using the same clip but adding different subtitles.  In this one, Hitler is devastated about not being cast as The Joker in Nolan’s The Dark Knight but others deal with just as outlandish topics.  Again, people are using cultural products in rather compelling and inventive ways.


The key here is to realize that this is not new.  For as long as cultures have interacted, they have adapted, appropriated, and re-constructed the cultural products and practices of others.


What are some other modern ways and examples of cultural appropriation and reinvention taking place?


What are some past examples of cultures, societies, groups, etc using the ideas of another to further their own?


What do these incidents (past and present) suggest about our larger conception of “culture,” particularly with regard to the above definition?