By Lance Eaton - June 05, 2010
The term “awesome” comes to mind (in its original use; not the TMNT/surfer lingo) when I think about the Internet Archive.  In fact, I often have to set a time limit for myself when I visit this site.  Like Wikipedia, one can get lost following the hyperlinks from one source to another or just doing search after search to see what the site has to offer.

The premise of the site is twofold.  The first is to catalogue the entire internet, day after day, month after month and take a snapshot of all the sites (or as many as possible).  They turn this into a virtual archive of the world wide web.  That in itself is an immense project, and one that is a boon for people curious to look at the history of the Internet or just doing research of one sort another.  At current count, it has some 150 billion (that is 150,000,000,000) sites catalogued.  For instance, one can look at Boston.com’s site and see how it looked back in October 20, 1996: 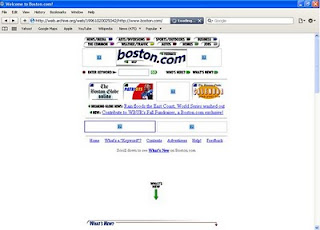 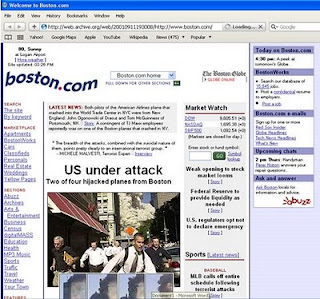 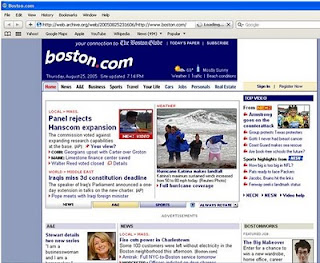 That is pretty useful, but the other major premise the site works on is an extension of Project Guttenberg, a site that looked to provide all public domain writing available online (and continues to do so).  Public domain works are created works (art, books, film, etc) that are no longer held in copyright by the owner/creator.  Depending on the product and the different laws (and loopholes), copyrights may eventually dissolve and the works are then open to free use by the public at large without paying cost to anyone.  For instance, if I started a publishing company of “classics,” I could publish a great deal of old material and never pay anyone for it, since they are public domain works.  In fact, a reasonable amount of publishers at one time or another (including audiobook publishers and even comic publishers) have used public domain works to help establish and legitimize themselves before being financially secure enough to acquire copyrighted material.

The Internet Archive has built upon this model but has gone even further as it now includes in addition to text, moving images (film, TV shows, news, commercials, home video, and other moving images), to sound (live music,  radio programs, old time radio, audiobooks, podcasts, etc) and even programs.  It’s a an unprecendented resource of material.  One could scour it for years and continue to find interesting material (especially since it is continually updated).  They have been highly active over the last few years and extended their projects and goals in interesting directions.

It’s worth noting that there are some remarkable finds here including George R. Romero’s Night of the Living Dead and the original 1910 version of Frankenstein by Thomas Edison.  But one can also find Abbott and Costello’s famous and hilarious radio broadcast of “Who’s on First”.  And for the more literary, there are The Complete Letters of Mark Twain.  Cliché as it is, the site does offer something of interest to everybody.  Do a few searches with keywords of interest and you’ll be quickly sucked in.

The newest offshoot of this project has been Librivox.  This site has created a massive library of audio material read by volunteers to create a free online database of audiobooks in the public domain.  The way the site works is that volunteers find public domain works and record their reading of them.  Obviously, some are not on par with the audiobooks from publishers or radio drama, but it’s impressive how good a great deal of them are and how, regardless of amazing recording tools, these members have helped contribute to such a massive project.  People can perform simple searches of the site to find relevant material and all of it is available for download in MP3s at 128KBS (CD quality roughly).  Of course you can just wander aimlessly through the catalogue as well.  They have a variety of selections including a series of lumped-together science fiction short stories http://librivox.org/short-science-fiction-collection-034/.    But there’s quite the range including the 911 Commission Report, Rinkitink of Oz by L. Frank Baum, Zadig by Voltaire, The Fall and Decline of the Roman Empire by Edward Gibbon, and The Prince by Nicolo Machiabelli.

Take a look around, what are some of the interesting things you dug up on Archive.org?  In looking over something, what did you find that was interesting or useful about it?  What was problematic in terms of using the site or the material found there?