By Lance Eaton - August 13, 2015
So I'm finally honing in on the final three entries of this series.  It only took a year, right?  But hey, it's not like I haven't been doing lots of stuff or posting much!
For those just joining in, here's the running list of previous entries! 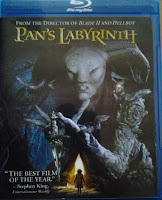 What a visually fascinating film!  To me, it fits into the fantasy dream films like Never-Ending Story, Labyrinth and MirrorMask.  Films that bleed the line between the real and the fantastic.  However, unlike Labyrinth and Never-Ending Story (and MirrorMask to a lesser degree), the backdrop of this film is powerful and draws strong parallels to the fantasy world that Ofelia finds herself in and they eventually meet in a way that reminds me of Never-Ending Story.  It's a darker film though as a fairy tale that makes a certain amount of sense.  Writer and director, Guillermo del Toro typically captures the dark world that is evocative of Dante's Inferno or Odysseus's venture into the Underworld.  It's not outright hell, but damn close!
The trailer for this film can be found here.

Though I didn't know it, PeeWee's Big Adventure was probably my first real introduction to camp and I was entirely mesmerized by it.  Mostly, because I didn't know what to make of it but still found it fascinating to watch.  I remember the first time I went to watch this film--I thought it was about PeeWee from the Smurfs (one of the two human characters).  I was initially disappointed but found myself watching the movie time and again.  The film has some great lines and great moments--both funny and for a young kid, scary at times.  Large Marge still haunts me and when PeeWee hisses; it's definitely uncomfortable.  Yet these are counterbalanced by other mesmerizing scenes such as his morning routine, his fetishistic obsession with his bike (something as a kid I could relate to), of course, the Tequilla dance scene at the biker bar.  It's such a crazy mix and works so well.  It is a shame that Burton's work feels largely less original and engaging with each passing movie, because this was definitely one of his best!

The trailer for this film can be found here. 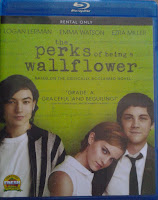 I connected with this film in some profound way (and followed up with reading the book--the film is a pretty faithful adaptation).  Charlie's life and experience are in many ways distinctly different, but there is certainly overlap that I recognize, particularly in the films final-third.  What I liked about the movie and the book is that it captures so well that idea of being both insider and outsider simultaneously: that weird sense of alienation while amongst friends that can be a hallmark of people battling depression or other emotional challenges.  In a way, it does its best to capture the outsider experience that so many feel while going through high school and though at times is celebratory, also captures some of the harsher realities and limitations that come with it.
The trailer for this film can be found here.

This adaptation of Marjane Satrapi's graphic novel is one of the best adaptations out there.  Granted, this makes some sense given that the adaptation from comic to cartoon seems like an easier transition than to live-action film, but the film goes beyond just that.  The film captures so well Satrapi's juxtaposition of being a child in a world that is slowly becoming anything but a child's world.  The loss of innocence, privilege, and freedom comes in waves and realizations and the film communicates this well with its motion, sound effects, and soundtrack.  It feels a perfect compliment to the graphic novel.  I remember the first time watching it with trepidation as the film starts in color but then moves into black and white as the character, Marjane begins to reflect on the past.  Mayhaps it was because Satrapi worked on the film herself or just that the directors had a good sense of how to capture the narrative.  Regardless, it's a powerful but light film in the vein of Life Is Beautiful.
This film can be found here.

I've always been a fan of Pinocchio.  I think it might have to do with the fact that Pinocchio and Pinocchio in Outer Space were two of the earliest films I owned as a kid and would watch them ceaselessly.  I always appreciated the idea of the puppet who aspired to be a boy.  Therefore, I grew ecstatic of the idea of a live-action Pinocchio being made, especially by Robert Benigni (as I had just seen him in Life Is Beautiful).  It seemed if someone could make it happen, it would be him.  And despite being a full adult male, he made it work with him as the titular character.  The film didn't get as much attention as I thought it might but I love this film.  It is quirky and magical and sometimes, utterly ridiculous.  But that is Pinocchio!  I remember first watching this film and feeling a little put off.  The film is dubbed rather than subtitled.  I thought they did this to attempt larger appeal but later on, I discovered it was because the dialogue moved so fast (and it does), that doing subtitles would have been next to impossible at times.  What was also questionable initially but eventually made sense and added to the film's quirkiness is that the film used famous actors for the voices.  So Jiminy Cricket appears as a dark olive-skinned bald man in the voice of John Cleese.  Disorienting for sure, but then again, a talking cricket should be disorienting!
The trailer for this film can be found here.

The film will always be known as "the ball sack movie" because that was the moniker my friend bestowed upon it after watching it.  But it is a curious tale from Japan.  The film focuses on a group of woodland creatures, mainly raccoons who come up against humans building houses on their land.  They must figure out how or if they can stop it and what to do about it.  However, raccoons are considered magical creatures with special powers in Japan, so their tools and resources means they are more creative in their assaults.  It's a powerful tale about environment, conflict, and shared resources that doesn't necessarily end happily.  That the film is over twenty years old and largely focused on children is pretty interesting given that films like this have only become popular in the last ten years.
The trailer for this film can be found here.

Another great noir film from the mind of James Cain.  Because I saw them together, it always feels like the sister film to Double Indemnity.  But the film has its own unique rhythm and challenge for its characters  It has a bit more ironic justice than we see with Double Indemnity and we even believe at one point that these characters may indeed make it, but justice (and the Hayes Code) won't allow it.  The chemistry between Frank and Cora is pithy and passionate but one doomed to fail.  A part of you roots for them in the beginning but then as the story progresses, you realize they deserve each other--as punishment.
The trailer for this film can be found here.

It's a film that many people enjoyed after the fact.  Somehow, it arose from it's measly film release and became a cult-classic.  What's not to like in this film--it has a bit of everything for everyone.  Adventure, action, romance, and silly and inane humor.  Like other films (Monty Python and the Holy Grail), it a highly quotable movie that people regularly invoke at the most appropriate and inappropriate moments.  It's also a film that is steeped in the fantastic but not necessarily in special effects, which is rather impressive.  It's clear that some fantasy needs to rely on CGI and heavy special effect to tell its narrative.  But Princess Bride is fantasy without needed much of the fantastic that special effects deliver.   It makes me wonder what it would look like today if they tried to remake it.
The trailer for this film can be found here.

Princess Monoke was the first animated film I saw by Hayao Miyazaki and from Japan in my adult life and have left its impression.  It a well-told tale with a strong female lead and mixing history with fantasy in a beautifully animated film that is impressive to watch even now, nearly twenty years later.  I was amazed at the complexity of the plot, the length of the film (over two hours) and the culture within the film.  That is, I realize it is derived in part from Japanese folklore but having never been much exposed, it was intriguing to see the ideas of demons, gods, magic, nature, and technology all intermingling in the film.  It definitely left me with a great interest in Miyazaki and Japanese animation.
The trailer for this film can be found here.

I grew up somewhat obsessed with this film--mostly because the two sequels had come out and there was supposedly (and eventually was) a fourth film coming.  It was the 1980s and slasher films were all the rage.  I didn't quite realize that Psycho was a bit different, but that's what being a kid is--no knowing the difference.  But Hitchcock's classic is still a powerful film that lingers.  It has all the markings of a noir film but goes sideways when one least expects it.  Anthony Perkins' performance still remains haunting to audiences over fifty years later and everyone's ears prick when they hear someone has mommy issues nowadays.  The most lingering image of this film is of course the final scene where we see Norman Bates sitting by himself with the voices of himself and his mother in his head.
The trailer for this film can be found here.

Your turn!  What are some of your favorite films and why?  Post them in the comments!

By Any Other Nerd Blog by Lance Eaton is licensed under a Creative Commons Attribution-ShareAlike 3.0 Unported License.
adaptation Films media Recommendations