Tales of Running: That was Hard...Let's Do It Again!

By Lance Eaton - October 22, 2013
26.2 miles in a single day is something I used to laugh at.  The line of thinking went something like this: "I don't run.  And even if I did.  I'd never run a marathon.  I don't care if a whole zombie horde was after me.  No way.  I can never imagine doing that.  That's crazy."  It's the same variation I have heard from myriad people over the course of this venture and shared with them my own goal to run a marathon.  I can certainly say I understand it from both sides of the experience. 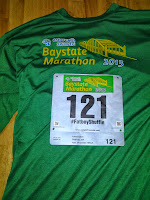 Anyone who has been following this blog (all three of you) knows that my trek to this has been long, mostly fun-filled, and chock full of insights and reflections. It has been one of the most rewarding experiences in my life in that I worked hard and achieved something that I largely though was impossible for much of my life.

So how did it go?  Well, like the blog title says, it was hard.  But in truth, it was awesome (in all senses of that word).  I hit challenges within the race to be sure, but it felt amazing to run and push my body in such a capacity and to complete it.  I don't think there was ever a time within the race that I didn't think I would complete it, but there were moments of fatigue that I had slipping thoughts of walking the rest.

The race had its various phases; each offering it's own unique challenges and experiences. 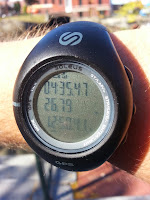 Miles 1-2:  This was probably the hardest for me mentally and where my doubt-demon sprang up to say, "Aww screw it!"  What fueled that thought the most is that for a self-described "flat" course, this was showing itself not to be with a winding upward hill to start the race off.  However, somewhere around mile 2.5, I felt someone grab my ass and there was a good running friend of mine who was doing the half-marathon (the two races were running concurrently).  His enthusiasm was enough to snap me out of it

Miles 3-7:  These miles I was trying to find my rhythm in betwixt getting a sense of the course, overcoming the fact that it wasn't as flat as I had hoped,  and trying to set a pace that I thought I could maintain.  (My goal was to maintain 10 minute miles, but that fell apart).  However, I did hit some delay when I had to make a quick pee stop.

Miles 8-14:  This section of the race, I soared (in so much as I can "soar" while running).  Miles 8-9 I picked up my pace and did under 9.5 minutes to catch up so that I was back on a 10 minute page.  This was when I felt strongest about the race--especially when I crossed the half-marathon mark directly on the 10 minute pace.

Miles 15-16:  Towards the end of mile 14, I started to feel the rumblings in my stomach and realized that a serious bathroom break was needed.  I made it to the next water stop where they had the porta-johns and made relatively quick use of the stall.  When I got out and back on the road, I needed some time to let things resettle.

Miles 17-21:  I tried to reclaim some of the lost time during these miles but found myself struggling a little bit.  When I passed the 30K (the longest distance I had ran prior to this marathon), I felt a great a sense of pride and just kept reiterating that every step after the 30K mark was "pure profit."  At the 20 Mile marker, they had a great drawing on the ground of a wall broken apart (i.e. breaking through the wall).  The amusement and thoughtfulness kept the wall away for a bit.  But I did hit "a wall."  I'm not sure I would call it "the wall."

Miles 22-25:  I did hit a wall during this stretch.  But the wall wasn't one where I contemplated if I could finish but merely how much of the endgame would I be able to run.  I won most of this battle with only a few short stints of walk.  I considered this reasonable since I had been battling a twitching calf since Mile 6-7.  It kept hinting at cramping but never came through (luckily!).  My muscles were aching; my feet were exhausted, and my resolve significantly weakened.

Miles 26 (and that damn .2!):  I saw the 26 mile marker and smiled wildly.  I returned to my refrain that I had uttered repeatedly throughout the race: "I. Will. Do. This."  It was hurting and hard to go by until I saw the sign "1 mile left."  This put the buzz in my step which was only further enhanced when I got to the 26 mile mark to see my partner there cheering me on for the last .2 miles.  With everything left, I chugged away to the finish line and finished strong.  I haven't seen the pictures yet, but that last minute of the race, my expressions were all over the place.  I was grunting, growling, smiling, laughing, and crying...I was a hot mess. 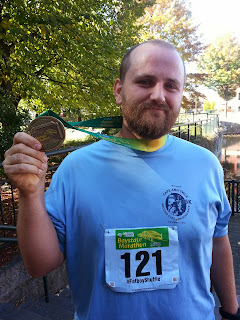 It was such an experience on so many levels.  I was inspired and amused by the range of people attending and cheering us on with signs that were sincere and silly.  I was inspired and motivated by many of the runners out on the course and where possible, I did my best to thank them afterward for giving me something more to push myself towards.  It was just a powerful experience that I know I will do again.

From everyone's general talk about the marathon, I kept hearing dread.  Many said they were happy they did it and proud, but not many said they actually enjoyed it.  I did enjoy it.  To be sure, I suffered at times, but I continued to feel happy that I was doing it.  I felt cramping and fatigue, but never was it at the point where I regretted my decision or thought it wouldn't happen.  Despite the challenges, I loved every moment of it.  To me--that is the most amazing piece of this whole journey.  I ran a marathon and i love it.  It's just so damn foreign and yet so damn right.

This won't be the last post on the marathon.  Hell, I had 4.5 hours to think about what I wanted to say here.  But this is a good place to end.  So how was the marathon?  Hard but I can't wait to do it again.

By Any Other Nerd Blog by Lance Eaton is licensed under a Creative Commons Attribution-ShareAlike 3.0 Unported License.
barefoot running choices health Running training