By Lance Eaton - October 08, 2013
This month I cruised passed the 300 mark (306 to be exact) and am well on the path to topping 365 books and maybe hitting the 400 mark.  We shall see.  I was in full gear this month and ready 47 books.  Granted 19 of which were traditional books and the other 28 were graphic novels, but that's still a fair feat for a month I would say.

So what were some of this month's highlights?  Let's check them out!

In the Body of the World: A Memoir by Eve Ensler.

In two words, this book is "brutally beautiful."  I've enjoyed Ensler's work--not just the now-famous Vagina Monologues but her other work (e.g. The Good Body) and her overall activism.  She has her share of critics about how she presents her message but the amount of good work and its impact on the world is palpable.  She has certainly been an inspiration to me on how to be a feminist.  This memoir meshes the world of her childhood violence with the continued violence of women around the world; all of which is superimposed on her battle with cancer.  In the Body of the World jumps from topic to topic at an almost frantic pace, mixing poetry, essays, and reflections.  Each piece conveys various facets of her experience and how the violence experienced by her body is connected to much of the violence throughout the world.

I listened to this as an audiobook and Ensler reads it in her typical dramatic flair.  This adds greatly to the experience and it's clear from her pace, emphasis and tone when she is ready poetry or an essay.  The various emotions from her writing boil over into her voice and it is extremely hard not to be moved by this book. 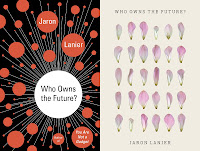 Who Owns the Future? by Jaron Lanier.

This book is not as emotionally charging as Ensler's but it is equally important for the world today.  As a well-known technologist of the 1980s and 1990s, Lanier has much to say about the modern interconnected world and his concerns about it.  Continuing on from his last book, You Are Not a Gadget, he explores the world of mega-servers, their powers to influence the world and the impact that can have on human affairs, particularly the world of economics and trade.  His biggest concern is that the information individuals are willing to give companies, as he claims, "for free" is setting up a system that will inevitably come back to bite us in our collective asses.  He offers up a new approach to the exchange of information that takes place every time an individual sits at a computer and accesses the internet.  His idea would be to create a system of micropayments so that everyone is given something for every piece of information that another person, company, entity uses.

Some people might not fully understand but every time they interact with a computer, there are numerous note-takers recording much of what you do in terms of what you click, what you look at, how long you look at it, etc.  Many have argued that Google and the like do much more in terms of surveillance than NSA ever could.  Lanier believes individuals should be paid for such information, even if it is micropayments (with the belief that it will amount to some small streams of revenue given the amount of information that is actually collected on us).  I do like the idea but I find Lanier still fails to prove his point.  His most basic argument is that companies are taking information from us without our consent and without due compensation.  Yet, that's not entirely true.  In many cases, we are exchanging services.  I provide information about me and in return, I get  use and access to tools that I would not have had otherwise.  He never substantially addresses this.  Otherwise, it's a fantastic and thought-provoking book.

Like One: Poems for Boston edited by Deborah Finkelstein.

I'm not a big fan of poetry, which is why I find it amusing that two of my big picks for this month have a strong poetry component (the other being Ensler's book).  Like One: Poems for Boston is a great anthology filled with contemporary and classic poets (e.g. Walt Whitman and Robert Frost) that celebrates togetherness.  Editor, Deborah Finkelstein was inspired to edit this anthology in the aftermath of the Boston Marathon bombings--not to put the focus on the tragedy, but to capture the unity that emerged in its aftermath.  The collection's proceeds go to help victims of the bombing.

Overall, I surprisingly liked this collection.  That's not because I expected less from it but mostly because I'm not usually as captured by poetry as other forms of writing.  I appreciate it, but am just not driven to read it.  However, Finkelstein not only selected a great and accessible collection of poems, she also did a great job of organizing the poems as they often flow from one to another in a way that's hard to fully explain but feels natural.  As one reads through the poems, it's easy to understand why the order fit; each one seems in part born of the previous poem and preparing to birth the next.  In that, there is a harmony to this collection that beautifully captures the purpose in celebrating the unity of Bostonians.


A Christmas Story: The Book That Inspired the Hilarious Classic Film by Jean Shepherd.

The less serious pick of the month is one that I'm betting most people did not even know was a book first.  Most people know A Christmas Story for the classic 1983 film that many of us relish watching around the holidays.  Some may even know that it's a musical now too.  But most, never knew it was a book first.

I really enjoyed the book.  It's a collection of short stories rather than one singular text like the film and it's easy to see how they turned it into a film so seamlessly.  It's not a case of the book is better, though I wouldn't say the film is better either.  They each do things that the others cannot and compliment one another quite well.  The only significant different between the two ends up being the time of the stories.  In the film, the story is situated in the 1950s, while in the book, the stories are situated in the 1930s.  Otherwise, they capture the epic adventure that is childhood quite well.

So there are my highlights from this past month.  For those keeping track, here's the full list of books thus far (or check it out on GoodReads):

And for those who want to know what books I enjoyed, here is the list:

So hey, what are some of your best reads this year?  What has grabbed your attention fro good or bad reasons?